A sewage incinerator in Russia has six enormous snails on the payroll to monitor air pollution conditions at their smokestack. The snails are eight inches long; they probably ambled over from Chernobyl. The idea is that even though smokestack emissions are already monitored by conventional means, the snails will give them a heads-up if things are starting to go south, because they are more sensitive, and if they get queasy, something’s up. True, it might be a while before they made it over to the infirmary, so I assume they’ve got them rigged up with sensors that will light up in some way if they get sick. They’ll put out a gastropodcast, or something.

This is a new wrinkle on the age-old coal mine canaries. Each miner had his own canary in a cage to take down to the depths with him, and if the canary keeled over down there, it was time to come up with a new plan, or at least come up. So the concept is time-tested, if not ideal from the point of view of the canaries or snails. 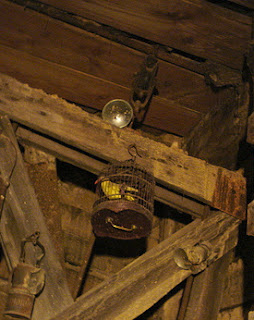 The coal miners took this pretty seriously because their lives depended on it, but most of  us no longer have any idea what our lives depend on. As Olga Rublevskaya, the director of wastewater disposal at the Russian plant, said, “live organisms won’t deceive anyone about the danger of pollution.” That is, they won’t deceive anyone who doesn’t want to be deceived. I’ve got my doubts that most of us would take a chocolate-covered hint. We’ve got organisms sounding alarms all over the place, but most people don’t get too worked up about snail urp. Our fish stocks are down or depleted. Birds too. Don’t even get me started about the amphibians. Acid rains down from the sky. Glaciers are in full retreat and islands are vanishing. Hundred-year storms are stacking up like a pile of unread New Yorker magazines. And everywhere you look, people are aggravated as hell if their pages load slowly or their mangoes aren’t ripe.

The snails are being observed by personnel who are trained to recognize when they’re starting to lose some of their zip. These might even be people who are authorized to do something to mitigate the conditions that trouble snails. I think that’s terrific, but I’ve got no faith that the rest of us are so finely attuned. Already we’re hip-deep in dead canaries on this planet.

The folks in charge think we’ve got a canary disposal problem and are looking for shovels. The rest of us are just wiggling our fannies in the soft, soft canaries.