Sit On My Face 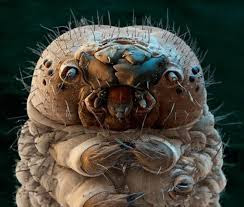 As far as I know, the face mite is the only living animal that doesn’t poop.

Ordinarily, I wouldn’t trust an animal that never pinched off a loaf. It’s just not healthy to keep too much to yourself. I’m willing to give the face mite a pass, though, because there’s no arguing with them at this point. They’re set in their ways. Also in your pores.

Face mites are very small spider relatives that sit on your face. They look like a worm that changed its mind at one end, jamming in eight legs in a bunch. The other end is where the anus orter be but ain’t. This is what happens when you rush a project without proper planning.

So what the face mite does is store up an entire lifetime’s worth of crap and then, predictably, drops dead. Fortunately, it only lives about two weeks, but still. That’s backed-up. It does all of this–growing up, having sex, dying, rotting, and dropping off its old shit, on your face. Mostly in your hair follicles or pores, but it moves around at night, and at a pretty good clip, considering. The female lays a heart-shaped egg half her own size in one of your sebaceous glands, and that hatches into a six-legged larva, later tacks on an extra pair of legs when it remembers it’s in the spider family, and then it continues to eat your face until it dies.

Under the circumstances I don’t get too worked up about having face mite poop disintegrate on my face, since its food came from my face to begin with. I think about it as being more of a compost situation.

This is the kind of thing that makes people itchy, though. There’s a whole industry in cosmetic exfoliation because people can’t even stand having their own personal dead skin cells on them, and they will polish their faces to a high gloss with scrubs and little Dremel tools so as to get down to the young juicy layers. They’re faithless, though. They’ll give that beautiful young skin no more than a day or two and grind it off again. And this is without even knowing about the mites.

Scientists knew about the mites relatively early. The face mite was first described in 1841 and called Acarus folliculorum. Nobody paid much attention. The next year someone called it Demodex folliculorum and everybody went Oh, sure, Demodex. We know all about that. They discovered there was a long form and a short form, just like taxes, and it was 1972 before it was finally confirmed, in a real groundbreaker, that they were two different species, in a report that also did not receive much attention.

Both of them sit on your face, to the degree they can sit, without a butt. They stick their heads into your sebaceous glands with their sealed nethers sticking out. Except when they’re motoring around at night.

They don’t bother me. When you’ve got enough years in your back pocket, you have a much better grasp of what isn’t going to harm you (face mites and refugees) and what is (falling down and global warming).

So they’re all welcome here. Tolerance and compassion are my goals. A face mite wants to drop an anchor larva on my eyelid, I say go ahead on. I’m a Democrat.