Sloths, And How They’re Hanging 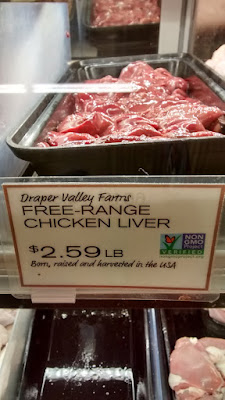 Sure did cheer me up to see Free Range Chicken Livers available at the local grocery store. Like a lot of people, I’ve come around to considering that it’s important how my food is raised, and frankly just the image of those chicken livers gamboling away inside the chicken has lifted my spirits. Shiny livers careen past the spleen! Romp around the crop! Scratch their tiny backsides against the gizzard! Why, if I could stand to eat livers, these are the very livers I’d buy.

Naturally, I could not contemplate the free-roaming life of the livers for long without thinking about sloths.

Because you absolutely never see Free Range Sloth Anything in the marketplace. And there’s a reason for that. Just about everything inside a sloth is anchored down. It can’t go anywhere. It’s true. If you were to spend much time upside down, you’d be uncomfortable very fast. All your little organs would sort of slump to a lower position and press on each other and feel all weighty and congested. But the sloth’s organs are pasted in place right where they belong, and they feel just fine. 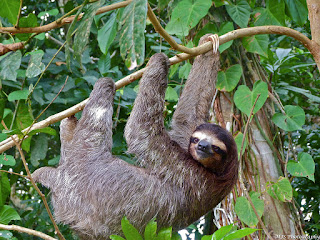 Well, that’s just the sloth organs, but up to a third of what is inside a sloth is sloth poop. This is not the reason sloths are so famously logy, but it can’t help. Sloths don’t eat anything but leaves, and they don’t eat them so very fast, and they’re not easy to digest. It can take up to a month to get everything you can out of a leaf. There’s really nothing to do but hang around and wait. You don’t get a lot of energy from leaves, either. So you’re not going to see a lot of zip in a sloth. It would require some expenditure of muscle energy to sit on a branch or move around a lot, so they don’t do that. They don’t even rightly hang on. They just grow their fingernails out like Howard Hughes and hook themselves onto a branch and call it a day. Not a lot is going to motivate them to do anything, except once a week, when they have to throw the gearshift into Mosey and climb to the ground and poop.

They only do it once a week so you’d think they looked forward to it–I would–but it’s actually a fraught time for them. They always poop in the same spot and any carnivore who might want to sample a sloth knows just where to find it, and they can just go right up to the sloth and start chewing, because of that sloth logyness problem. 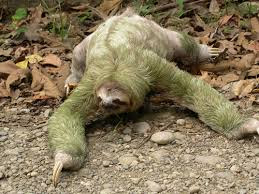 So why poop on the ground, when you could just as well let fly from a high branch and get a gravity assist? Some guess that the sloth is avoiding undue noise, but I suspect an animal with a month’s worth of poop inside it makes plenty of noise already. There’s some speculation that the sloth goes to the ground to poop in order to provide a good substrate for the moths that breed in sloth poop and then go live in sloth fur, but that’s kind of giving the sloth a lot of nobility of purpose he might not actually possess. In fact, the sloth is a universe unto itself for any number of moths and other insects, and also algae, which accumulate in its fur. The moths produce moth poop which fertilizes the algae and there’s an idea that the sloth benefits from being rendered greenish and indistinct, but no one really knows. Even if a predator were to locate a big, slow, green sloth, there’s a good chance it’s already dead: it wouldn’t look any different. So perhaps the predators lose interest. There’s no obvious upside to the sloth of any of this, and frankly it’s an odd mammal that can’t outrun algae.

A sloth can be just as free-range as you please, but it’s not much of a range except for the potty stop. And anyway, is there any reason a sloth moth could not equally well avail itself of sloth poop dropped from on high? I can’t think of any. So why does the sloth endanger his life to go all the way to the ground to take a dump?

I’d like to think it’s a matter of simple courtesy.