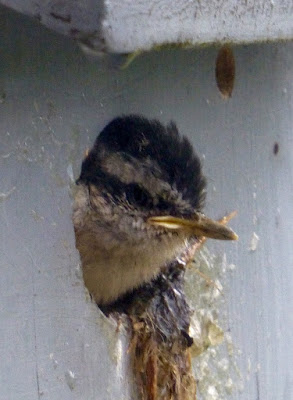 Some of you may recall last spring, when our nuthatches tried to make new nuthatches out of whatever they had lying around the house, and everything went sideways for them. One nestling might have made it, five were dead in the nest, and the seventh was snatched up for scrub-jay chow on its maiden flight. That was deeply disturbing. The scrub jays and I had had an understanding. They’d hang around and watch me weed and I’d toss them an insect larva whenever I unearthed one. I thought I was just being companionable, but evidently the jays were running a protection racket, and when I fell a little behind in the larvae, it was curtains for the nuthatches.

The first was that deer are now known to eat baby birds. That wrecks their herbivore cred for sure. Lots of vegetarians are one strip of bacon away from moral free-fall and evidently it isn’t much different for deer. Deer don’t want to be restricted to plants; they just don’t have the teeth for anything else. But show them a nice gummable nuthatch chick, and they’re all nom-nom. Who knew? 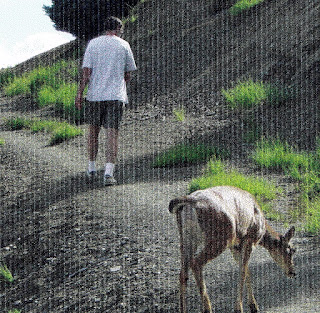 Well, I had my suspicions. One time during a hike we saw a lovely doe well across the valley. She began to amble our way. She wasn’t in any hurry; but she pointed  her pretty nose at Dave, and she headed right for him. It was funny at first. Then Dave turned and tried to walk away, but by then she was on the trail and closing the gap fast. He picked up the pace. So did she. It didn’t make sense. It didn’t make sense to be wary of a small deer, either, but when animals don’t act right it makes you apprehensive. Now that we know deer will eat meat, it’s all coming into focus. What part of Dave, that can be seen from the rear, is reminiscent of a baby bird?

I don’t think there’s a bird mama in the world that would hesitate to dive-bomb an ungulate who is busy nibbling on the family legacy. But deer aren’t the only problems. Item two: slugs. Slugs in Europe eat baby birds. 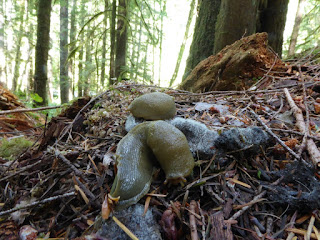 It’s not going to be a good way to go, for the nestlings. Slugs have rasps for mouths. They don’t bite off and chew; they scrape away. That’s going to feel good to an itchy mite-infested nestling for about two seconds and then it’s going to be all out of skin layers. There’s just not that much to a bird at the loogey stage. All of which begs the question: how neglectful a bird parent are you if you allow a slug to sneak up on your babies? Slugs are only marginally sneaky.

Many birds’ strategy is to lay bunches of eggs. Because they’re not all going to make it. Maybe they’re philosophical about them; I hope so. They always said that in the olden days people had scads of kids to help run the farm, and mitigate the losses to childhood illness. (That’s one reason; the other is that Daddy won’t quit poking Mommy with that thing.) Maybe bird parents are like Catholics. They pump out enough to run through the standard twelve names (Patrick, John, Francis X., Joseph, Paul, Matthew, Mary Celeste, Mary Catherine, Mary Mary, Colleen, Eileen, and Baleen), and then you’ve got to count on some attrition if you’re ever going to name another one.

I still feel sorry for my nuthatch family, but maybe it’s for the best. Catholic school ain’t cheap.