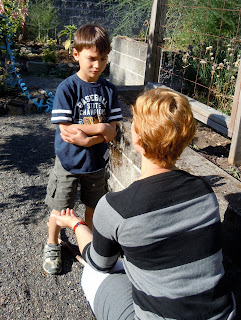 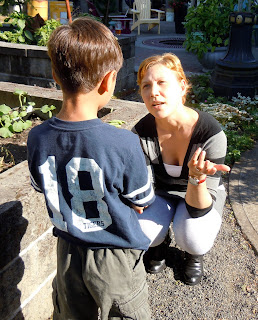 “Because if you’re hungry, we can all go home right now. We can all of us, your sisters and you, we can just turn right around and go home. We can have some lunch and then we can all get in the car and come back here and then we can go swimming in the afternoon swim period.”
This is the modern parenting paradigm. You negotiate by offering the child choices, and that way the child never has to feel the sting of utter refusal. First time I saw it in action, a young mother was begging her child to walk south down the street with her. The child had north in mind, and hard. Mommy took a few steps south, making wheedly noises, but her kid wasn’t worried about being left behind. Sure enough, mommy doubled back and caught up with the northbound train. “We’re going this way,” she sang out, pointing south. “Would you like to walk, or would you like to skip?” Skipping really hit the spot. The little girl skipped north. Man, what a skipper! Mommy had lots of time to come up with a new choice before she caught up. 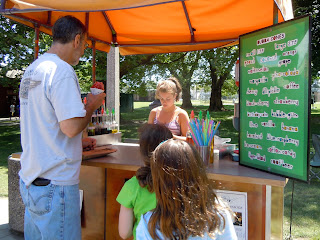 It’s quite a time-consuming routine. It takes a bucket of patience. The woman at the pool was hanging onto hers by a very thin thread, and the son was sawing on it with a razor-blade whine. He was this close to a snow cone, he felt certain.
Three other children stood by anxiously watching negotiations. They had their swim suits on and were wrapped in towels. The pool was a few yards away. Would he call her bluff?
“Okay, let’s go home,” he said. Yes, he would!
The mother was completely at a loss. Her other three children were staring at her, waiting to see if they had to go back home and change and have lunch and come back in a few hours.
Presumably, the deal with offering choices is that the child will always feel a measure of control. Because he can choose, he will not feel it necessary to schedule a tantrum. Sure enough, Junior here had a measure of control. Actually, he had all of it. Mom was down to one choice, herself. Cave in, or murder him, which is still frowned upon when mothers do it, even in the blue states.
My parents were also into choices. I can’t remember specifically the kinds of choices I was offered, but one of them was always “or else.” If further explanation was required, it was done with the flat of the hand, which had the advantage of being quick and easy to understand. My older sister, who was smarter and more sensitive, was able to get the gist of the choice with a significantly raised eyebrow. Neither of us wasted any time on a tantrum, or the whiny run-up, neither of which ever bore fruit. Ever. A couple times a year I sensed that Mommy could be talked into buying a Danish at the Safeway because she wanted one too. That was about the extent of it. I didn’t even try it if I didn’t catch the Danish-aisle linger on the way to Dairy. 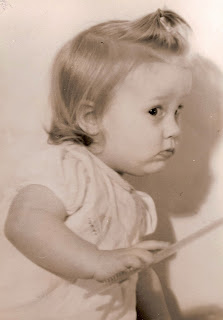 The neighbor girl used to get beaten with a switch. She had to go find the switch herself. That always had a sickening Jesus-lugging-his-own-cross aspect to it. But this wasn’t considered unusual at the time. It did have the advantage of introducing the child to the concept that life isn’t fair and she can’t always have what she wants. The whole idea that I should get my way, just because, never entered my head. There were people in charge in my house, and they weren’t me. This seemed normal and right. My mother told me later that I was spanked at least once a day for the first two or three years of my life, until I outgrew it. I remember two of the spankings. I didn’t think I had them coming. Evidently, all the rest of them were right on the money. I bear no scars. And mom and dad probably never even considered murder. All in all, a fine system.
Back at the pool, Snowcone Boy sized up the situation and discovered he was at an advantage in the ongoing negotiations. Mom had made a tell-tale hesitation, as her other three children looked up in concern, lower lips quivering. Would she really take them all home again when they were this close to getting in the pool? Homeland Security would have assessed the Constrained Exasperation Alert in the red zone. Snowcone Boy almost grinned. He saw a snowcone in his immediate future, in exchange for agreeing not to return home for lunch, plus a forfeited candy bar to be named later. Life was good. 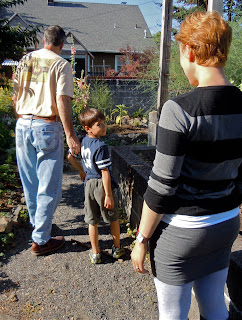 It was Dave who had the perfect intervention idea. At 6’5″ and two hundred pounds, he was just the fellow to carry it out, too. Just clap a meaty hand on the boy’s shoulder, spin him around and march him off, saying “All right, champ. Let’s go meet your new mother. You’ve broken this one.”
If everyone sends us one dollar, we can probably make bail.
By Murr Brewster|2021-11-09T21:27:24-08:00July 21, 2010|Uncategorized|28 Comments