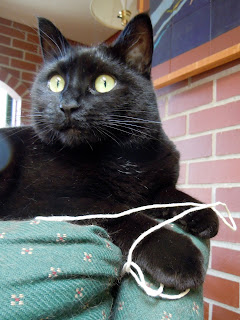 Whoa. I found a piece of string the other day. Just lying there on the carpet. About a yard long, too. I picked it up and ran it through my fingers. String! I hadn’t seen any in years. It was like an artifact. I drifted in time. Arthur Godfrey murmured from the melamine radio; bottles of milk were at the back door, and a Fuller Brush man was at the front. I don’t know where this string came from. It may have originated somewhere else in the house, and was relocated courtesy our cat Tater, who was responding to her Rodent Tail Facsimile Identification chromosome. 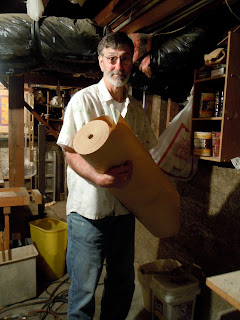 When I was a kid there was more string around. You could buy it in balls. People used to use it to tie up packages to be mailed, after first wrapping them in brown paper. Dave picked up a giant roll of kraft paper–seriously, we could Christo the house in it, twice–around 1980, right about when the post office began discouraging people from using paper and string. It would have been two lifetime supplies if you were born in 1900, but now it should last into the second coming. When I started with the post office in 1977, the guys used twine to bundle up their mail. I’d watch the old geezers slam together a perfectly straightened bunch of mail and take the twine and whip it around, once, twice, and twice more widthwise, then snap it off using the twine itself as a cutter. The whole bundle was secured in three seconds flat. It was a beauty to behold. “I’ll be able to do that someday,” I said to myself, keeping to my life strategy of small ambitions, but in fact I never did learn to do that. I dented up my fingers trying to snap it off for a few months and then we went over entirely to rubber bands, except for the old farts, who guarded their twine stash as though it were their very youth and glory. 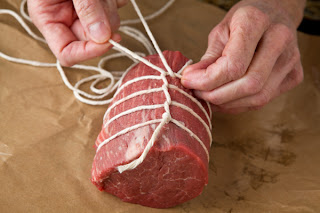 The thing about string is that it’s almost impossible to throw away. That’s a staple of obsessive-compulsive comedy: the string hoarder. You develop a character that lives with nineteen cats and saves string, that’s all you really need to know about that person. Mom saved string, although I don’t believe she’d save it if it were under two feet in length. She was Depression-thrifty but she wasn’t nuts. Unless you think maintaining a linen closet packed floor to ceiling with toilet paper is nuts. But toilet paper was among the things strictly rationed during World War II, and the entire experience brought her lots of clarity about the important things in life. (Sacrificing during wartime is another one of those artifacts, like string and bottled milk at the back door. Back in the day, they didn’t even think about putting the whole war on the credit card. They were backward that way.) 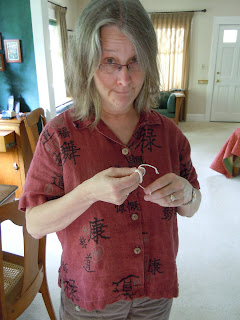 Mom used string for packaging and odd jobs and keeping the roast beef from getting away. I couldn’t think of anything I would need a yard of string for. Roast beef must not be as unruly as it used to be. And Dave has this thing about clutter. He is not a knick-knack guy. He would like to have a house he could clean with a fire hose, although if he actually had a house like that he’d just have to find something else to be obsessive about. At any rate he is unlikely to be enthused about a string collection. So I coiled the string around my fingers to throw it away, but then I set it down. It’s on the windowsill. In case we need it. You can’t throw away string. We’ve probably got a chromosome for that.