Life Under And Above The Cross 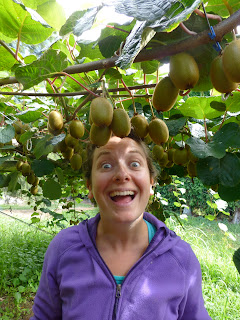 Stuff is expensive in New Zealand. Books are expensive,
clothes are expensive, and food is expensive. But no one expects a tip, and everyone is paid a
livable wage, with the minimum set on high. I do not know all the economic
implications of the high price of food, but suspect that one culprit is that,
unlike in America, ¾ of the menu is not made entirely out of federally
subsidized corn syrup, and the lamb and beef originated as actual self-propelled
animals, rather than hybridized
meat-units bred square to economize on space. Plus, anyone who wants to can pluck
her own fruit salad from right outside her window. I saw no evidence of extreme
poverty or extreme wealth. Those might be related observations.

Other observations: there are stars. Just as you’d expect,
over time a whole lot of our stars have slid down to the southern hemisphere, and
bunched up at the bottom. So it’s a good place to look at stars, unless you’re
hoping to spot ones you know personally. I made a point of finding the Southern
Cross as my friend Dale suggested, even though I was leery that it might be a
huge scary constellation sponsored by the Klan. It wasn’t. It was an unassuming
little number more appropriately called the Cute Little Southern Kite. And I did catch a glimpse of good old Orion loping over from the north, although his
dangling—let’s go ahead and call it his hunting knife—was pointing straight up.

Anyway, the whole star thing is such a big deal that they
put up a nice set of telescopes on a prominent hill called Mt. John, just to
keep track of them all. If you stand on top of Mt. John you can see in every direction, and watch gangs of weather jousting for supremacy. We didn’t stay for
the star show. The sun in New Zealand goes down reluctantly and briefly, like
it’s just stepping out for a cigarette. But daytime visitors can comfort
themselves with massive slabs of carrot cake at the hilltop café. Any lighter
desserts would get blown into Lake Tekapo (“Taah-wow-wow”). The astronomers here are especially interested
in flagging down stray planets that might resemble our own. They’d be dim, of
course, but can be detected if alignment is just right when they wobble the
starlight behind them. The ideal would be to wave at another group of
life-forms like us and in the same phase of evolution, just after developing
telescopes and before engineering their own apocalypse. Which gives us probably another hundred years or so, but it’s not like we have anything better to
do. It’s a long shot for sure, but there are a LOT of stars. 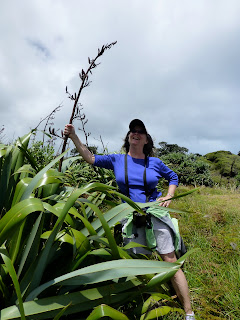 In the southerly regions, much of the bush (snort!) looks like Oregon, if Oregon had
parrots and the ferns grew into trees
instead of just on them and
everything smelled like Juicy Fruit. A lot of the plant life is familiar as
specimens that have showed up in Portland nurseries angling to make a buck off
climate change. These are the plants available in two-inch pots with
instructions to tuck them into a protected corner, feed them with an
eyedropper, and read to them on the chillier nights, and if instructions are
followed, the odds were good they’d double in size in ten years. Here, those
same plants had gone Godzilla. One in particular, with great towering stands of
spiky leaves, was especially familiar. I gaped at acres of them and struggled for the
name. “They’re New Zealand flax,” Linda said. Oh yeah! We save up for those and nurture them through two or three seasons until they’re big
enough to be considered viable, at which point we gingerly begin to announce
them to our Facebook friends and sock away for their college educations, and
then on a single winter day they all turn into snot. Which is why they’re not
called Portland flax. 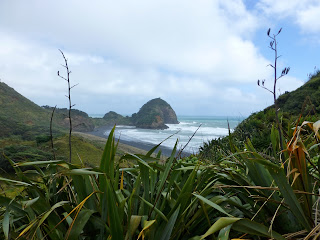 Far from being tucked away in a protected corner, they romp
over the mountains and smirk at the winds. It is very windy in New Zealand.
People plant giant walls of greenery around themselves just so they don’t have
to tack across the yard to get the mail. We stood on a mountain and watched a
rain squall roll in over the ocean, giving us enough time to put on our
raincoats and Ziploc our cameras, and then a single raindrop an acre wide
smacked into the side of the mountain and on into the next territory by the
time we’d zipped up. Couldn’t say how hard the wind blew, because they have
pretend measurements over there. Four thousand kilometers per fortnight, or something.
But it makes peeing an extreme sport. I anchored myself well, and in thirty
seconds my stream never hit the ground, I was air-dried, and had the beginnings
of a Brazilian.