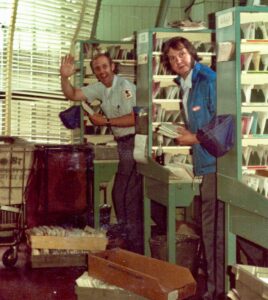 If someone comes up and asks you if you’re stupid, and you don’t know the answer, it’s possible you took a wrong turn in life.

So. Letter carriers get accused of lallygagging when they show up late. As far as the customer is concerned, the entire point of the carrier’s day is when he hands over their personal goods. The rest of the day is fluff and nonsense.

“The regular always gets here at 11:30. You can set your watch by him,” they’ll mutter. The polite ones, anyway.

You’re brand-new on a route. You show up at the sorting case with the task of finding an itty-bitty slot for every one of 3,000 letters. It should take the regular something like four seconds to pick up the letter, look at the address, and poke it in one of some 300 corresponding slots. Repeat for the next 2999 letters. But that’s not what it takes you. You’re standing there getting a sweat stain on the letter for a half minute before you even find the correct street on the sorting case, let alone the right house. A few hours later it gets quieter and quieter in the station as one by one carriers bundle up their letters and leave your ass behind, and you stand there whimpering quietly in the shadow of your tower of mail until the boss comes by and tells you to leave everything but the first-class and the Wall Street Journals, and then you consult a map and drive the crappiest vehicle in the fleet out to the route and figure out where everyone’s mail slot is, and it might be at the back door, and it might be three steps inside the fence with the dog, and it might be a flowerpot on the porch. Then you find the next house, which may or may not have visible address numbers.

As shadows lengthen and the whole day looks like the deepening dusk of your own pathetic life and half the mail is still inside your vehicle and you’ve skipped lunch altogether and you’re already wondering how it could be so hard to do something that always looked so easy, some grumpy old fart in scuff slippers will open up the front door and ask you if you’re just stupid, or what, and you don’t know the answer. You truly don’t. Before you took this job you didn’t think you were stupid, but you can think of several certifiably lint-headed fellows in the station who have punched out hours ago and are having beer with the boys and planning their next trip to Reno. And here you are, hoping people put their porch lights on so you can read their house numbers. You’ll go home in the dark and fall into bed and dream of finding address numbers all night long.

You have just lallygagged for eleven solid hours on the strength of a stale donut eaten on the fly at dawn.

Periodically the mail routes get out of adjustment and new boundary lines are drawn and the block that used to be one of the first delivered is now dead last in the other carrier’s route, and the customers on that block are united in their low opinion of that carrier. A Very Important Person in a very wealthy section of town once glared at our friend Stricky (RIP) for weeks in a row to no effect and finally, exasperated, asked him if there was any way he could get his mail earlier in the day. “Yeah,” Stricky said smoothly. “Move to the front of the route.” Stricky used to be a boxer. He could pull that shit off.

Want to know who the lallygagger is? It’s the one you can set your watch by. The workload changes day to day and in order to be that punctual you have to have a lot of slack time built right in. You then can dilly-dally, chitty-chat, read people’s magazines, scratch your nuts if applicable, and space out your deliveries to the minute. It’s called a “retirement route.” You are not only old enough to have the seniority to get that sweet route, but you’re old enough to utterly intimidate the supervisor du jour if they get a little uppity.

You know who else doesn’t know what a mail carrier does all day? The Postmaster General.