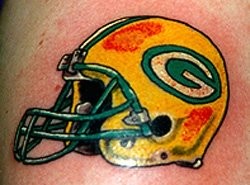 If you judged America by my Facebook friends, about half not only did not watch the Super Bowl, but didn’t watch it vehemently. The rest of them were rooting for the Packers. We did watch it this year, right at home on the world’s crappiest TV set, surrounded by mounds of salt and fat in several forms. I thought the Packers were going to win, and I based it on a vignette I saw while waiting at a traffic light earlier in the day. A car rolled up and honked and the window rolled down and the driver started yelling Steelers! Steelers! Steelers! while flapping all the Steelers paraphernalia festooning his ride. This outburst was directed at a gentleman on the sidewalk wearing a Packers hat. He started yelling Packers! Packers! Packers! while pointing at  his jacket (Packers), peeling off  his jacket to reveal his sweatshirt (Packers) and peeling off THAT to show his Packers wife-beater and bicep tattoo. I blacked out before he removed his pants, but declared him the winner. He’s got devotion. (I would have had a Red Sox tattoo by now, but it would have to go between my legs.)

Anyhoo, we really pumped up our street cred this year by not only watching the Super Bowl but by skipping a classical piano concert to do it. It’s been on the calendar for a while, and Dave noticed it last week. “That Louis Lortie concert is during the Super Bowl,” he said with resignation, “I guess we can go and then we can always come home and finish cutting off my nuts.” Dave likes piano more than football, but it is a source of some dejection to  him that we hardly ever seem to take in the Super Bowl. It started 25 years ago when we went furniture shopping instead. Subsequent years have even found us in the fabric store, where they have a little joyless room set up with a TV for all the other nutless men to watch the Super Bowl on.

Well, the concert was all-Liszt, and I’m not that big a Liszt fan. Liszt is like a moon shot: all flash and technical prowess and brimstone, but an awful lot of trouble to go to just to hit a golf ball and bring home a bag of dirt. We found a good home for the tickets and stayed put.

It was a pretty good game, for football. I didn’t much care whose side God was on this year, and I never have. I used to root for my numbers in the office pool. “Go, five to one! Go, five to one!” I’d shout at the screen. But I’m no longer employed. I had to find other areas of interest. 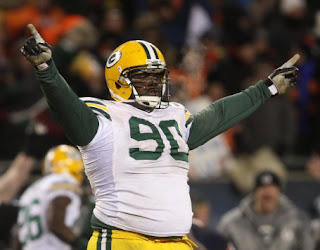 One was the possibility of a blowout, a giant explosion of lineman meat. The field looked like a Spandex proving ground. Everywhere there were men so enormous they could eclipse a blimp; they shouldn’t have been able to move at all; but thanks to their being encased in miracle fabric, they got around just fine. They each had so much potential energy from the heroic compression of the uniforms that whenever a hole opened up, they’d blast right ahead. I think that’s how it worked. The announcers were always pointing out where the holes opened up.

But the announcers were a letdown in general. They were okay if all you wanted to know was who had the most heart or the most adversity, but they were a total washout in the figurative language department. I’m a fan of analogy and metaphor. When you compare something to something else, like Liszt to a moon shot, you allow the reader’s mind to make its own connection, which makes it that much stronger, especially if the things being compared are not obviously related. [My favorite example from the archives is when I compared evolution to both a videotape and the U.S. Congress.]

In drawing his analogy, this announcer dude went from football all the way to baseball. He was proud of it; he hammered it home. The quarterback could not be counted out, he said, because he could hit a home run at any time, and it was just a matter of how many at-bats he had. Really, dude? That’s all you got? If the announcer dude had been Lord Byron, we would never have had:

“The Assyrian came down like a wolf on the fold;” it would have been:

“The Assyrian came down like a sneaky Babylonian.” Lame. 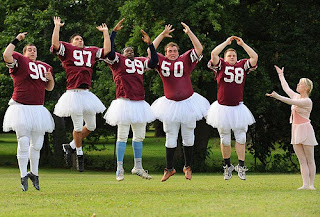 There is something to be said for not using references so obscure your audience fails to make the connection (see obscure Red Sox reference above), so maybe that’s the justification. If so, maybe this is an audience I don’t want to be a part of.

I’m penciling in facials for next year. We want to look good for the ballet.