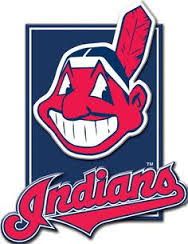 You’ve got to hand it to the Cleveland Indians. They’ve done real well. They were so good they might even have done as well if they’d been called the Cleveland Bowling Pins. It’s hard to say, because they’re still the Indians. They’ve still got the dopey Little Injun Boy on their hats and everything. He looks like Little Chief Pee-Pee Pants. He’s adorable.

There’s talk of replacing the name and mascot, but it’s meeting the usual resistance. I saw a thread about it on Facebook and, predictably, someone was cheesed off. “Are you saying calling my team the Indians makes me a racist?” Well, no, not that per se. Other stuff maybe. Maybe you just can’t fathom that such a mascot might be seen as insulting, since you don’t mean anything by it. Maybe you lack imagination. Someone’s messing with your tradition? Okay. Hang onto that aggrieved feeling, because we’ll get back to that in a minute. 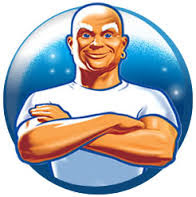 Let’s try a little experiment. Supposed the contending team in this year’s World Series is the Mighty Whities. There’s a fellow flexing on the cap; he looks like Mr. Clean. How does that make you feel? I see. Yeah, bad example. Mighty Whities is kind of redundant. You’re not offended. Dude looks strong. Mighty Whities rule.


Which is kind of why they’re hard to mock effectively.

Let’s try again. Y’all lost the war. New Mexico is the most powerful nation in the world, and most of you English-speaking white people are clustered in little shabby settlements. Strip malls. Trailer parks. You’re doing okay outside of tornado season, and as long as the Waffle House stays open, nobody much complains. Then the World Series rolls around and there they are again: the Pasty-Faces won the pennant. It rankles, because you know you’ve gotten the short end of the stick in general, and the New Mexicans think you’re kind of dirty and you kind of are, what with the meth problem and the fracking spoiling your water, but you still  have a proud European heritage and a right to dignity. Remember that bristly aggrieved feeling when you thought someone was calling you a racist, thinking you’re something you’re not? It feels like that. You and your people have been a national joke for 160 years. It’s like a splinter in your heart every time the Pasty-Faces come up to bat wearing those stupid caps with Alfred E. Neuman on the front. You’re being made fun of. You’re inconsequential. 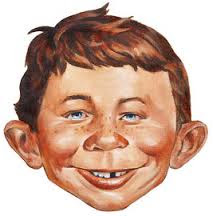 So is this another one of those cases of political correctness? We all know that person who is offended by everything. You learn to tread lightly around her, even though you think she’s too sensitive and she really needs to get over a lot of that shit–and you’re probably right. It’s when a whole lot of people have the same complaint that it might be worth considering they have a different but valid perspective. And that their grievance might have more weight than your tradition.

Sure it’s a tradition–it’s a relic from the days when white men never had call to doubt their dominance over everyone else, including women. The name and mascot are fossil ridicule, embedded in a now-crumbling substrate. But you know? It’s not that big a deal, a tradition that’s lasted only your whole life, and part of your father’s life. That’s not that long. You can do better. You’ll get over it.