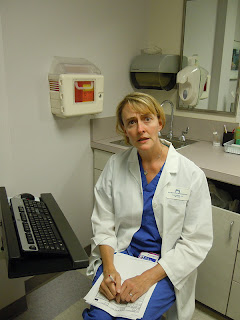 I loved my former gynecologist, who was cute, smart, and laughed in all the right places. She once even agreed–eagerly, I might add–to take pictures during my exam in case I needed some for my blog, and you can’t put a price tag on that, although they might have been worth something thirty years ago.

So just as soon as you get a doctor you really, really like, what happens? She treats you for twenty-five years and then up and quits on you. Was it something I said? Something I might have emitted under pressure? Either way, I needed a new doctor.

And it’s not like choosing a plumber or a mechanic, most of whom don’t charge for the breast exam. It’s a special relationship. You don’t generally shake hands with someone you’re meeting for the first time and then wing out your knees and say “check this out.” In the 70’s, sure, but not these days.

They usually talk to you while they’re spelunking away, but I’m not always paying attention to their actual words; I’m listening for an echo, and as long as I don’t hear one, I figure everything’s okay. Or close enough. I do have a sorority of fibroids that have been living rent-free in my abdomen for a number of years, and that was a concern. My new doctor hadn’t met them personally, so I thought she might subject them to a scolding or something, and I’d have to rush to their defense. “Oh those,” I’d say. “No, they’re okay. We have an understanding. They don’t sit on my bladder, and I don’t have them cut out.”

Fibroids are something that nobody tells you about until the day they’re poking around and say, casually, stripping off a latex glove, “looks like you have some fibroid tumors in there,” and by “in there” they mean “down there,” and by fibroid tumors they mean–what, exactly? Do I have one foot in the stirrup and the other in the grave? 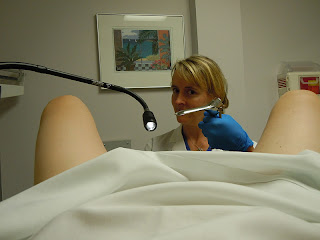 My gynecologist could have called them fibroids, as most people do, allowing me to imagine I had a belly full of breakfast cereal of some kind, but she–the one, come to think of it, that I liked so well–clearly said “tumors,” and didn’t act too concerned about them at all, which made sense inasmuch as they were in me and not in her. And, once she expounded on the topic a little, and revealed how common they were, and how cancerous they weren’t, I did begin to relax. Still, anything growing inside my person that I have not made personally out of beer falls under the category of “unauthorized,” and I don’t approve of it.

The theory goes that you don’t do anything about fibroids unless they’re getting unruly or keeping the neighbors up, because by the time menopause comes barreling through and runs off with your estrogen, their infrastructure is likely to collapse and cause them to shrink, in much the way tax cuts cause bridges to fall down.

Anyway, my fibroids and I have come to a truce over the years, and I didn’t want to upset them by introducing them to a brand new doctor, but there was nothing for it: she was going in, and that was that. I needn’t have worried. She met the sorority; I believe she may even have shook hands, and all was well. I was informed, without echo, that I now have “pale tissues,” which is a normal consequence of the eviction of estrogen, along with chin whiskers and an inability to give a shiny shit what other people think of you. I argued that the paleness could be put down to my Norwegian heritage, but she said no. Apparently, the bloom of youth is not solely on one’s cheeks.

Things were going so well that I went ahead and told the new doctor all about concerns I have about gynecologically irrelevant areas of my body, chiefly my head, and mentioned my fainting incident. “I guess it was a loss of blood pressure due to a combination of giving blood, having a beer, and standing under hot shower water,” I explained. My new doctor frowned and shook her head.

“I don’t think the beer had anything to do with it,” she said.

I love my new doctor.