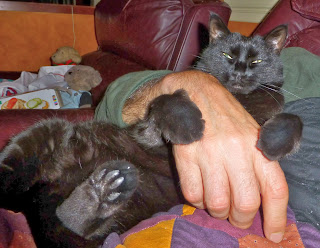 Big day in the Tater Brewster household. That’s what her name is at the vet, but nowhere else–she just goes by the one name, like Cher, or Madonna. Or God. Tater has just accomplished the thing she’s been training for her whole life. We don’t know just how old she is; she was nearly full-size when we picked her up, but we don’t know how many previous owners she’d run through, for being too much cat. We almost took her back to the Humane Society that first week too. “We wanted a little less cat,” we planned to explain apologetically. “Something with a little less cat and a little more more ottoman in it.”

That first time we saw her at the Humane Society, she was pinballing a toy mouse around in a room full of snoozing cats. She smacked the mouse under the door into the hall where she couldn’t retrieve it, and we sent it back under for her, but kept looking. Personally, I was looking for something more speckly. But none of the speckly numbers had much joie de vivre. This one was jammed right up to here with joie de vivre. We took her home. Her joie only multiplied. Everything in the house was battable. The only time she wasn’t  knocking things off shelves, she was climbing on our heads or gnawing on our hair or spindling our eyebrows out of pure, uncontrollable affection. Her favorite thing was smacking toy mice under the refrigerator, or under a closed door. 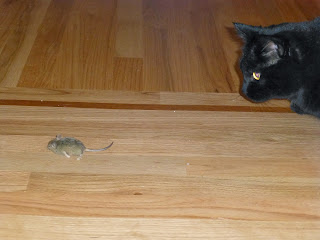 But she never saw a real one until last week. And by gum if she didn’t nab it and carry it around in her mouth. This is where the previous cat, (Saint) Larry, used to fall down on the job. She would strut around with the mouse and then set it down and look around the room in case there was any praise or admiration in it. She’d sweep her head around as though she was getting a lifetime achievement award, and when she looked down again, the mouse would be gone. Every time.

Tater had a feeling about this mouse long before she nabbed it. She was acting all fidgety and spending way too much time nosing around the baseboards. It was either a mouse, we thought, or an impending earthquake. And the thing about things that impend is you can never rule them out. But this time, we’re going with mouse. Inasmuch as she finally came up with one. Dave was the witness. She nabbed it, stuck it in her mouth, and trotted into another room with it, and set it down. And lost it. There was really no place for a mouse to go in that room, except somewhere in the folds of the quilts that we sit under to watch TV. 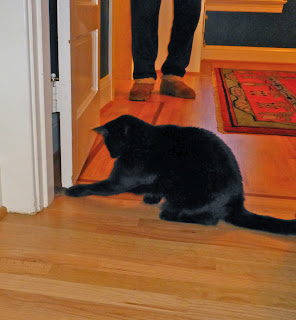 There’s never much on TV anyway.

But later, there she was with it. She’d gotten it back, and this time she had done something instinctual to it, and it was a much reduced rodent. Battable. And she batted it under the door. Went to the other side and batted it back. We let her keep this up for a couple minutes before Dave intervened to dispatch the poor critter.

Tater always knew this day would come. With every twitch of her dreaming paw, she knew. She was like Homo erectus gazing out over the savannah and visualizing being a billionaire venture capitalist. Finally she had fulfilled her genetic promise. Her legacy as a carnivore was now enshrined, frozen solid in a plastic bag at the bottom of the garbage can. 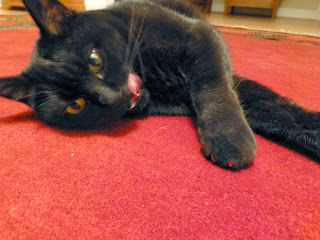 We don’t approve of letting domestic cats murder native wildlife, no matter how much it entertains them. That’s why we don’t send her outside to help the thick population of subsidized neighborhood cats with their songbird eradication project. But we’re willing to make an exception for wildlife found pooping in our dishwasher.