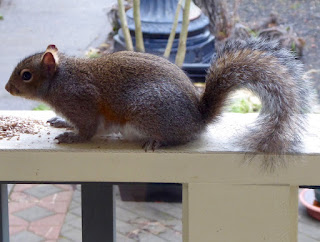 Let me introduce you to the Eastern Gray Squirrel. Isn’t it cute? Pretty little gray and brown coat, white vest, big fluffy tail. What a busy little thing! Oh, see it scratch. Scratch, scratch, scratch! It’s plumb full of mites and it’s itchy as hell. Look at that hind foot go! If you could get that thing threaded you could sew up a shirt in ten minutes! Ha ha! A-dorable!

I kid, of course. The Eastern Gray Squirrel needs no introduction, because it’s introduced itself every damn where already. Just the fact that it’s called an Eastern Gray when it’s all the way out here in Oregon lets us know that it’s an illegal immigrant, but once you let enough of them in, nobody can do anything about it anymore. The Eastern Gray Squirrel eats nuts, berries, Trail Mix, and bird seed that totally does not belong to them. When it isn’t scratching or eating, it’s running around like it’s coked up and/or making new squirrels, in the absence of any evidence that there is a shortage. 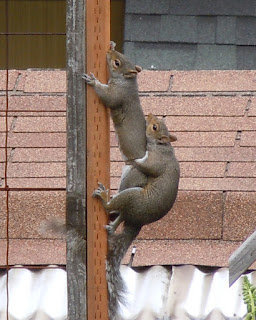 Fun fact about these squirrels! Sometimes they don’t eat bird seed that totally doesn’t belong to them. Sometimes, instead, they eat all the insulation off your electrical wires, causing your house to burst into flames when you’re trying to sleep. Or, as we have recently observed here, they take shelter under your solar panels, and, in a leisurely but thorough manner, strip the insulation off those wires, causing your solar panels to become very expensive squirrel shelters that produce no electricity. Every now and then a squirrel will actually electrocute himself. But not nearly often enough.

Why do squirrels chew on wires? Well, due to a horrible idea on the part of evolution, their teeth keep growing all their lives, and they need to file them down by chewing on your house and other things that totally do not belong to them. There’s no good reason they couldn’t have designed themselves to allow their teeth to get nubbier and nubbier over time until they become senior squirrels and they can recline in their nests while their kinfolk bring them mushy stuff to gum, but no, they are not interested in such a caring social structure, when they can just hunker under solar panels that totally do not belong to them, and ruin them with their freaky growing teeth. It’s a stupid adaptation. It would be like if humans had one leg that never stopped growing and in order to keep from walking in circles all the time they had to go file it down by kicking Eastern Gray Squirrels. 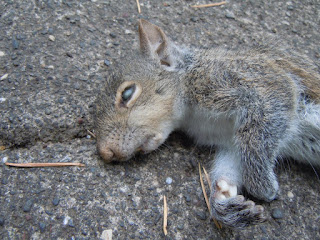 Whatever charm these little rapscallions ever had has worn off for Dave and me long ago, but there’s a limit to what we can do about them. Dave does own a Crossman PowerMaster BB rifle that he is perfectly willing to use to dent them up with, but we live in a very deep blue pocket of a blue state and we do not have the emotional fortitude to withstand the wounded looks and earnestly expressed dismay of our neighbors. Short of a stealth advertising campaign to promote Very-Range-Free squirrels as The Other Stringy Meat, our only option is to engage the services of one of our urban coyotes–just once a week, say. It would be bad news for all those neighborhood kitties that like to massacre all our birds that totally do not belong to them, but that’s a chance I’m willing to take.