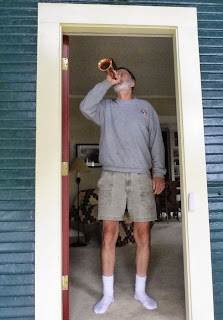 This here is my 500th blog post, and I can hardly hear the trumpets over the sound of my mind blowing. As many of you know, I spent over thirty years Moving The Nation’s Mail, a job that allows for considerable daydreaming, especially if you’re not too fussy about whose mail goes in which slot. And from time to time I found myself coming up with a clever way of saying something, and I’d polish it up like a little word-agate. Based on the small shiny collection of clever things I had rolling around in my pocket after thirty years, I concluded I should be a writer. I also made plans to be closer to six feet tall.

A lot of times these things never really get in gear. They stay in neutral and make little putt-putt noises and sometimes there’s a little toot of blue smoke but mostly you spend the rest of your life idling in the driveway. People get notions for their bucket lists and knock off one or two of the ones that only involve buying airfare, and the bucket stays pretty full, and after a while there’s nothing left to do but kick it. The sorts of things that make me very happy are pretty low-key: take a nice walk, look at the occasional cool bug, tip a really good beer. I’m tickled enough with life as it is that I hadn’t even really gotten a start on making a bucket list. But if I had, writing an actual book would have filled up most of it.

I needed a bigger bucket. As soon as I retired I put my nose to the ground like a burrowing mole and rumpled up a whole collection of postal stories. I started and finished a novel. I started and finished a second novel. Now I’m about halfway through a new book, creative non-fiction this time. And most of the reason I was able to actually do what I always thought I should do is that I got in the habit of writing Murrmurrs, and that’s why I keep writing it.

Which is why the occasion of my 500th blog post reminds me so much of pulling a sausage casing out of a dog’s butt. Right about the time it occurred to me that cats make nice pets, I saw a friend bend down next to her straining mutt and grab hold of something netherly and start tugging. Poor dog was all bound up, but there was a little tag hanging out that turned out to be a sausage casing. That accounted for a few inches of the blockage; then other stuff started coming out, including not only what was designed to come out, but bits of string, and plant material, and part of a raincoat, and I don’t know what-all. Some of that might have been in there for months. This blog, as you may have guessed, is my canine gastrointestinal tract. And you, my dear readers, are pulling on the sausage casing.

And boy howdy, but there turned out to be a lot of crap in there. It keeps coming out because there are people out there interested in it, and they keep giving it a little tug.

Reason I started this venture was to develop what is called a platform. You can write the best stuff on the planet but nobody will publish you if you don’t have a platform. It was understood: if you hoped to be a published writer, you need a blog. No real explanation how that works. And people don’t just 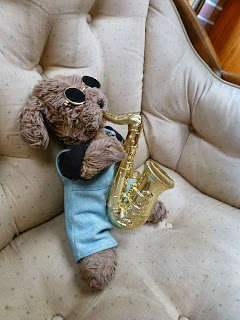 flock to your blog because it’s so grand. You have to go out there and whack your way through a shrubbery of blogs and leave calling cards. There are billions of them. There are photos of people’s dogs and photos of people’s dinner. You can spend hours at this. Then you’re supposed to tweet. Everyone tweets. It’s getting loud out there. After a while you don’t have time to look at cool bugs.

And not to cast nasturtiums on anyone’s dog or dinner, but after a while you begin to spend less time in the shrubbery. And that trajectory of visitor numbers that had looked so promising begins to level off and then dip and dive. You loyal readers are a lot more intimate group now, but I hope you’ll stick around and keep tugging on the sausage casing.  And I’ll keep posting here because this place is the cod liver oil to my creativity.

Only twice a week, though. We want “crap” to remain a metaphor.