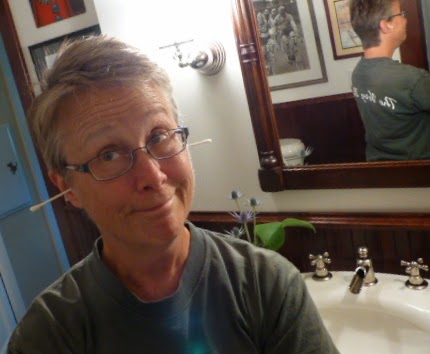 We’re supposed to have one of those. It could happen at any time. Of course that could be said about anywhere about anything, but we really have a good shot at it. The entire west coast is trying to shear off and scootch its way toward Alaska and it can’t do that without bouncing things around. We’re overdue for another gigantic earthquake and I more or less expect to experience it in my lifetime, even though that’s not that much time, anymore.

Whenever you put a Q-Tip in your ear, you can’t help but recall years and years of advice never to put a Q-Tip in your ear, or, for that matter, anything smaller than your elbow–that’s the standard recommendation–which is very silly, because nobody is that limber. I look forward to my Q-Tip and only wish I produced more ear wax for it. Still, I do understand that you’re not supposed to put it in too far in case you puncture your eardrum. I put it in kind of far anyway, and everything’s been fine so far, but if we get our earthquake while I’m cleaning my ears, I can’t guarantee the safety of that eardrum.

Accidental tectonically induced Q-Tip insertions are not high on most people’s fret lists. Sensible people are anchoring their water heaters to the foundation and laying in stocks of bottled water and canned goods and updating their contact lists. And cleaning their ears with their elbows.

The truth is I think about that earthquake pretty often. I think of it with excitement and anticipation, and that is because I haven’t been in any strong earthquakes before. If I had, it’s just possible I would contemplate more dire consequences than a cotton-stick intrusion. The other time I always think about earthquakes is when I get in bed on the second floor. I imagine the huge side-to-side movement and the crumbling of the house beneath me and I think: maybe I should start wearing pajamas.

I quit wearing pajamas in high school. I remember the first time I did it. I had the sheet pulled way up to my neck in case anyone looked in on me, because I understood that ours was not the kind of family that slept naked. Even in seismically calm areas of the country, it was not the Lutheran thing to do. But I hated getting all twisted up in a nightie. The experiment was great. It was delightful.

It still is delightful. But I can visualize myself in a heap of rubble, the second floor having crashed down with me on it, bits of ceiling and shingles and astonished roof raccoons all around me, and there I am, naked. I would think: the naked bit isn’t optimal, but at least I don’t have a Q-Tip in my ear. I don’t really want to start wearing pajamas again and I keep trying to tell myself that my fellow citizens will have more on their plates at that moment than to worry about a sixty-year-old lady wearing nothing but dust. They probably won’t even look at me. Not twice, anyway.