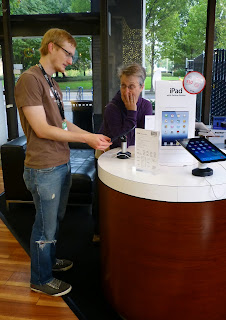 Recently I reached into the jumble of cords in a drawer and pulled out the very camera cord I wanted in a matter of seconds, and I realized: I might not own enough Devices. I might be falling behind. What to do? Should I run out and buy an iPad?

I asked my friends. What do you do with your iPad? What does it do that all my other shit doesn’t do?

The answer was universal. Nothing. It doesn’t do anything that your other shit doesn’t do. It just does it splendider. It strokes instead of scratches. It coos instead of squawks. It brings you beer in a fine cold glass instead of a red plastic cup. You will love it.

Good enough for me! I tootled off to the Mac store and was much relieved to find it virtually empty of customers, with an eager trio of employees behind the front desk smiling at me as I came through the door. I know how these things go, and there’s always some humiliation involved. Somebody is about to find out just how old and ignorant I am, and my chances of understanding anything are much better if my salesman isn’t pressed for time. Also, if there are fewer people in the store, there are fewer witnesses to my decrepitude.

“May I help you with anything?”

“Probably,” I said. “Apparently, I don’t have enough Devices.” I like to start out like this. It introduces me as a fairly funny person. At least, it does if the other person chuckles. If the other person does not chuckle, but merely stares at me, and fingers the bone in his ear, it introduces me as an odd and possibly idiotic person. If a comedian pratfalls in a forest but nobody is there to laugh, she is just another pitiable heap of humanity struggling in the duff.

“We have devices,” the youngster said after a moment, trying. “What did you have in mind?” 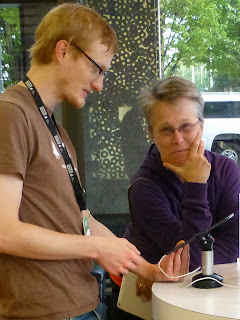 We walked over to the iPad display. “What do you want it for?”

I have no idea. What does he mean by that? He sounds like someone who has just been asked if he would lend out a valuable personal tool, and would rather not.

“I don’t know. I would like something portable to be connected to the Internet with, and maybe to be able to write on it. Like a word processor. I’d do a lot of that. Writing.”

But I do! Because of its splenditude. I said, okay. I don’t want to write on it. That’s the last thing I want to do. I want to do all the other things. What are they, exactly?

Follows a tutorial at warp speed in which I am introduced to someone called Siri and various images slide across the screen and flip about like zoo monkeys. It looked splendid. Abandoning all pride, I begged him to talk slower. It’s possible he did, but I couldn’t tell. Well! This particular device is forgey, I learn. I don’t know what this means. Maybe it forges ahead. That’s probably good. And also, you can store a cloud in it. I don’t know why you’d want to, but it sounds splendid. Oh! It’s not that you can store a cloud in it. It’s that you can back up into a cloud.

That’s never as much fun as you think it’s going to be. My mind instantly detoured into a recollection of being a little kid and saying something to my dad about how neat it would be to sit down on a cloud. And he told me we could probably go into a cloud the next time we went to the mountains. We drove up to the Blue Ridge and sure enough there was a cloud parked up ahead, right on the road, and I got all excited, and then we drove into it, and it was not fluffy at all. I decided to ignore the bit about the cloud. The salesman was still going on about something and I still had the expression on my face appropriate to a person who is paying attention, and I think I was getting away with it. It seemed important to me to appear to be thinking thoughtful thoughts and taking in this high-speed information, but sooner or later the jig was going to have to be up, so I decided to just buy the damn thing and hope it would teach me how to use itself later. 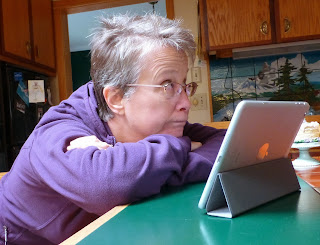 Well. It depends. It depends on how many jeebies you want in it. Did I plan to watch a lot of movies on it? Did I plan to jam all the music I’d ever heard in my whole life into it? Not really. Again, I am not really sure what is going to happen between me and my new Device. Basically, we were going on a blind date.

“Well, you could probably do just fine with a couple of jeebies,” he concludes. I thought so too. I probably wouldn’t even be comfortable with a whole lot of jeebies. And I went with the little cute tabletty thing instead of the bigger one, because I am a small person. We were all set to go settle up, and then he offered to show me a selection of hats for it. I got a snap-on number. And took my new Device home, and set it on the counter, hoping it would be forgey enough to strike up a conversation.