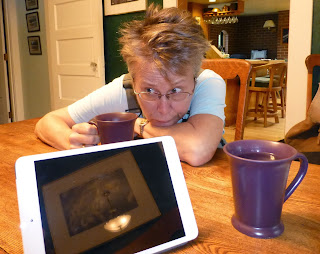 My new iPad mini lounged on the counter with its little snap-on hat, but didn’t do anything. I sauntered by it a time or two with a breezy insouciance. We were like to victims of a blind date, eyeing each other in the coffee shop, and I had the uncomfortable feeling that my iPad was beginning to regret coming. This is stupid, I thought. I marched over to the counter and snapped off its hat. So, what’s your sign?


My confidence was all bluff. Under the hat, I suspected, was a new form of IQ test in tablet form, and as usual I would crap out on the spatial-design section and gain a little back on the spelling part and wait in vain for an essay portion to pop up, and when the results came back I wasn’t going to like them. I was not eager to get to know my new friend. Well, let’s see, I thought. Let’s start with the little notepad thingy. I can type something on that, maybe. A keyboard popped up at the bottom of the page. I decided to get the feel of it; I’m a good typist. THE QUICK BROWN FOC JUMPRF OBRT YHR LSXY FOH. 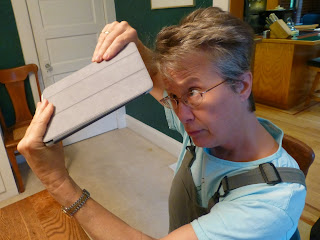 Okay, this was strictly a hunt-and-peck operation. I folded it up neatly and tried to figure out how to navigate over to the internet. How do you make the page go away? There were no buttons. I finally gave up and pushed what I thought was the off button, and my home page with all the little icons popped up. Oh! I hit the browser button, and introduced my Device to my personal facebook page. I figured they’d have to learn to get along sooner or later. Then I traveled over to Murrmurrs and set up a button for it. Excellent! Can I respond to comments on this thing? I selected a comment and hit “reply.” A window appeared, all ready for me to put something clever in it. But this time there was no keyboard. I turned the thing right and left and upside down and couldn’t find a magic keyboard button. I leaned on the machine in despair and up popped a keyboard. Whoa! What had I done? Could I do it again?

That’s how evolution works. You’re some bird like every other bird you know, only your beak is

screwy. Basically, you’re deformed. Your upper mandible tweaks right, and your lower mandible tweaks left. Depressed, you do what anyone would do to make yourself feel better–you overeat. And halfway through your first pine cone, you discover that your weird bill is superior for extracting seeds from a pine cone. You eventually die a very fat bird, but not before sending your magnificent mutation to the next generation of crossbills.

So I have done something entirely by accident, meaning merely to shut the machine down and let it think about what it’s done, and lo–the keyboard appears. I have no idea how I did this, but I will start swiping at things and poking at things until it happens again, and this time I will be paying attention.

Okay, that has nothing to do with evolution. I am not a crossbill. I did not independently come up with a good idea. I am a research parakeet in a psychology lab, pecking at everything in sight until a pellet of food drops out, and even when it does, it’s going to take a few more times before I put it together. 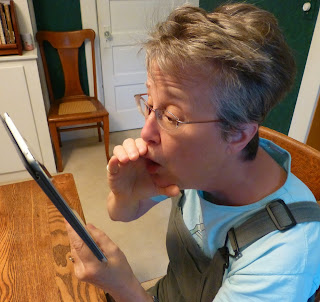 Meanwhile, I have switched back to facebook because it had been a whole ten minutes since I checked on my friends, and I don’t like to be thought of as neglectful, and when I go back to Murrmurrs, I find I can’t summon the keyboard again. I scratch at the screen. I delicately trace my fingertip at points around the margins. I hold my finger down for a second and a bubble appears, but I don’t know why. I am about to give up when I remember something I was shown in the Mac store when I wasn’t paying attention.

Siri? I say to the machine. Nothing. I put my lips closer to the screen. Siri? Nothing.

It’s okay. I don’t know what I’d say to her anyway. You like to make a good first impression. You don’t want to call a girl up and say right off could you make my keyboard pop up? She might get the wrong idea. Or, like the fellow at the Mac store, she might have no idea where to start with me. Siri? Make it go. It’s pitiful.

Maybe Siri is busy with all the other Devices out there. Maybe if everyone wants to talk with Siri at once, they have to take a number. Although Santa Claus manages it. 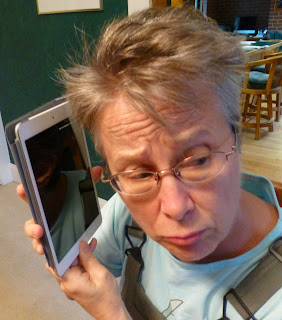 It’s probably not a good idea to get into a habit with her anyway. Supposedly if I can get this Device to work for me, it will communicate with all my other Devices. I don’t have that many other Devices, but I’m not sure I want them talking about me behind my back. This could set them all on the road to mutiny.

But look! Right there in the Settings page! It says Personal Hot Spot. I turned that on right away.

Sometimes things aren’t as much fun as you think they’re going to be.