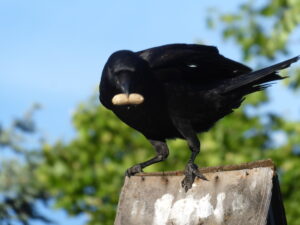 Crows are super smart. Everyone says so. People have made a point of studying crows and they’ve concluded they’re smart because if you give them a short stick, a long stick, string, and an Allen wrench inside a cage, they are able to retrieve the wrench and assemble an IKEA end table, and then they wait around to see if anyone puts some snacks on it. Also, they are able to distinguish between different people and poop on the assholes and leave the regular people alone.

Which is all well and good. I certainly believe crows are smart, but I think most birds are a lot smarter than people give them credit for. A chickadee with a brain the size of a Tic-Tac can keep track of dozens of people, and all kinds of birds can put together an architecturally sound domicile with their face. A particular four-inch-long chickadee of my acquaintance, in fact, learned how to make an entire human come out of a locked house with mealworms. I guess no one has bothered to devise a five-step puzzle for a nuthatch but I think that’s just the old soft bigotry of low expectations, as George W. Bush once read off a teleprompter. And most people assume birds don’t recognize them because most people don’t give birds any thought at all. In fact they don’t recognize birds, but they have no trouble thinking it’s the birds that lack intellect. It’s projection, basically.

Anyway I’m sure my personal crows Dickens and DooDah are as smart as anybody, but I’m not all that certain they’re the smartest birds around. They recognize me and regard me as a reliable source of peanuts in the shell, and they show up when I come outside. But what happens then is revealing. Let’s say Dickens and DooDah are on the telephone wire. I come out and chuck a peanut onto the patio. They seem to brighten up. 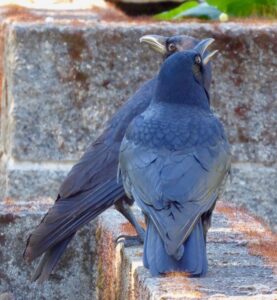 “Did you hear that?” Dickens says.

“I did. It sounded like a peanut,” DooDah says.

“Sounded like a peanut to me too. Did you see where it went?”

DooDah moves a little to the right. “I think so. Like, kind of under that chair?”

“I was thinking maybe. You want it?”

“We could go have a look anyway.” Dickens floats down to the patio, followed by DooDah. They edge up near the peanut.

Suddenly a scrub jay that had been perched on a fir tree three blocks away bombs in like a guided missile, nabs the nut and arrows off in a flash.

“What was that?” DooDah says.

“I think it was an asteroid!”

I chuck out another peanut and another blue rocket whooshes in and disappears it.

The scrub jay drills the first and second peanut into the soil. A normal scrub jay will put literally thousands of seeds and acorns in the bank every autumn and remember where each one is that winter, and you don’t know where you left your keys.

“I don’t know, maybe there wasn’t another peanut.”

The crows don’t know where the peanut is. They’re not sure there really was a peanut. They don’t necessarily see what is right in front of them. They tell each other the same old stories. They’ve got nothing in the bank so far and figure if worse comes to worst they can always hit up the Burger King.

They’re exactly as smart as people.