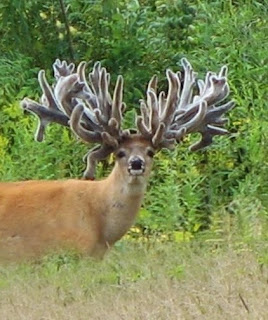 Everyone bemoans the existence of dirty money in politics, although in the case of Ana Lisa Garza, who is running for a seat in the State House in Texas, it might not be dirty so much as a little schmutzy. The majority of her $87,000 war chest came in the form of deer semen.

Garza is going to require a lot of spunk to unseat the incumbent, who has previously garnered 100% of the vote.

Presumably, there is nothing illegal about the campaign contributions, although if there were, no one is eager to investigate it. The donations should result in some slick campaign literature, and make it easier to smear an opponent.

It was a surprise to me that there is such a thing as a deer breeder, inasmuch as in many parts of the country, including urban areas, deer are so prolific that they need to be regularly spatulaed off the roadways and no one gets to eat their own lettuce. It didn’t seem like there would be much call for any deer semen, let alone banks of frozen buck butter.

But that is because I had heretofore been unable to imagine the existence or desirability of a deer with a rack of antlers that look like broccoli.

The semen is stored in straws and frozen in banks of liquid nitrogen. One straw of ejaculungulate can be worth up to $10,000, and it is possible to acquire up to 60 straws of campaign donations in a single, um, collection. That’s some big bucks.

I do not know how deer semen is acquired in a straw, and am not eager to investigate it. It sounds like the sort of thing you’d get an illegal immigrant to do.

As it turns out, the process involves a rectal probe and an electrical pulse which inspires the buck to ejaculate.

Once the straws are filled, they are frozen and kept in banks. Many of the people who buy the straws do not get custody of the actual straws. It’s a tradable commodity; someone buys $50,000 worth of semen straws from someone else and they are transferred to his account, but not removed from the tank. For all we know, this is what bitcoins are.

Deer farming is big business in Texas. Breeders are often focused on antler size and the resulting freaks are transported to high-fenced shooting preserves. Bucks with antlers the size of Christmas trees do not live as long as wild deer, if allowed to try, but they’re generally put out for the hunt. They’re human-raised and unwary, so all the hunter needs to do is park his fanny and wait for an eight-million point buck to wander by and look up in anticipation of a nice apple or something. A fair number of people make money off this and it’s probably a great idea for breeders to purchase a few legislators here and there to ward off the pansies who might raise a fuss.

But if the business is ever shut down, there might be good money in rectal probes.