The CHIRP! Of Love Is In His Face 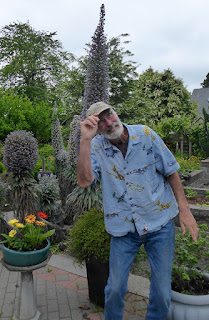 This is a fact. Dave has a history of being dive-bombed by birds. There are many reasons this could happen, but the primary one is that birds are shitty judges of character. Dave is not a threat to birds. Any bird should be able to read it in his face, but apparently his face is too far off the ground for their comfort. I can walk right next to him and they’ll go for his head every time.

But until this week, we’d never seen him get threatened by a hummingbird.

Our local Anna’s hummingbirds do an awesome courtship display that involves flying up to the stratosphere and then arrowing down at warp speed, pulling up a the last second before *splat*, and then zooming back up again. Moreover, there is a tremendous CHIRP! sound right there at the bottom end of the flight, coming in fact from the bottom end of the bird. Quite recognizable. Whenever we hear it, we look straight up to locate the aerobat and watch him do it again. He pulls out of his dive right at about eye level from a prospective mate, who is observing from a twig. It’s attention-getting.

This time we heard the CHIRP! just off Dave’s shoulder. And–we checked–there was no female hummingbird in sight. We stood still. We waited. And sure enough, a half minute later, that hummingbird swooped down within a foot of Dave’s left ear.

He was impressed, but not enough to have sex with a hummer. 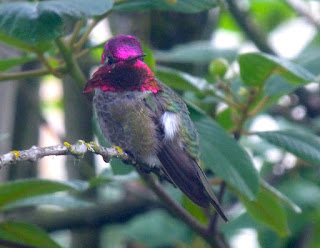 So we don’t know what was going on. It felt threatening.  It felt like the bird was trying to chase Dave off, not get Dave off. But who knows? Either Dave looks like another male threatening his territory, in which case we would assume it would fly straight at his hat, and not do a courtship display. Or, he finds Dave very attractive, and he would like to have three seconds of sweet hummingbird bliss on some suitable orifice, several of which come to mind.

Because as far as I know, male hummingbirds do not defend the nest. They have nothing to do with the nest. They defend their own territory of flowers and hope to entice a girl into their territory and chase off rivals and go to considerable trouble for that three-second wham-bam and then it’s Sayonara, Sis, and good luck with the kids. So although other kinds of birds might try to discourage Dave from getting near their nests, the male hummer has gotten all he wants out of the relationship and is back to looking out for Number One.

That leaves attraction as the only other possibility. Something about Dave appeals to a male Anna’s hummingbird. The male makes that tremendous noise during his courtship display with just his tail feathers and maybe he senses a kindred spirit in Dave.

But the ability to make remarkable noises from your tail end isn’t much to go on in a relationship. Sure, it worked for us, but we’re a special case.

We should ask Anna. It’s her hummingbird. Anna Masséna, the Duchess of Rivoli, was probably pretty hot. At least she was all the rage in the ornithological community. Her husband, the Duke of Rivoli, was an amateur ornithologist, which is to say he had an enormous dead bird collection. John James Audubon took a fancy to her too, but it was another ornithologist who thought to name the hummingbird after her. Audubon was probably doing this long involved courtship thing and making a gigantic bird painting for her, and then René-Primivère Lesson swoops in all CHIRP! and says “Ma chérie, I give you zees hummingbaird.” No one knows what the Duke of Rivoli was doing all this time, but apparently not defending his territory.