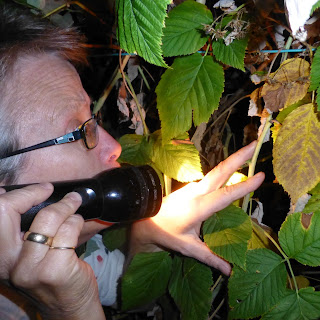 We have two crickets in our yard, and they are at the five-foot level of our raspberry canes. We can hear them, but we haven’t seen them. Many people, including myself until about a week ago, believe they chirp by rubbing their legs together. In my defense, I would add that I have been able to use the word “stridulate” in a sentence for decades. But they don’t use their legs. They use a pair of wings. The upper part of one wing is stroked against the nubbly part of another wing. It’s the males making the noise. They’re hoping to attract females, in theory, but they also attract parasitic flies that lay eggs on them and the fly maggots eventually eat their way out of the cricket, to its lasting detriment. So it isn’t the grandest plan. I think we can safely conclude that the crickets chirp because they really, really like to. In fact, a young male cricket can sit in his bedroom and stroke his wings all night long.

Our crickets are likely to be Snowy Tree Crickets. And those are pale, if not precisely snowy, and probably hard to see against the raspberry leaves. Usually one of our crickets gets the show going at nightfall. The second one pops in a little later, but they chirp in unison. That’s totally normal. If we had more than two crickets, they’d sit in a circle and go off all at once. Our second cricket has a slightly higher-pitched chirp. I assume his instrument is a little smaller.

The Snowy Tree Cricket chirp rate is related to the ambient temperature and can be predicted, it says here, using a simple formula expressed in Dolbear’s Law. Well, I never heard of Mr. Dolbear and, not that I’m a libertarian or anything, I thought his law was on the unnecessary side. And who was this fellow whose only contribution of note was a cricket chirp temperature predictor? Well! 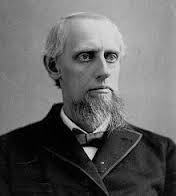 Mr. Amos Dolbear in fact invented the telephone eleven years before Alexander Graham Bell. And he invented the wireless radio years before Marconi. And the only thing he couldn’t do was get his patents to stick. A full plan for a remote-control color HD television set was recently discovered in an 1888 file of his marked “what the hell.” So Mr. Dolbear was a very clever man, and yet all we have left of him now is this cricket thing. It would be like if you invented sliced bread and later the Internet, and a hundred years from now nobody’s even heard of you except for your Law of Peonies (“the bloom period of peonies is directly correlated with the incidence of hail”). It’s sad, is what I’m saying.

And now, thanks to Mr. Dolbear, we can tell what the temperature is by how fast a young cricket is chirping, but we still can’t make him stop. Even if we tell him “you keep doing that, and flies are going to burst out of your abdomen,” he’ll still do it.