Our neighborhood has alleys. They’re cool. In some areas they’re paved, but most of them are not.  When we moved in forty years ago, the garbage trucks used to come down the alleys. Before that, antique people used them to deliver milk too. It was handy and orderly, a bit of The Commons. There wasn’t a lot of room for error with those garbage trucks. Almost everyone had a crappy garage on the alley with nothing holding it up but force of habit, and they’d sag into the right-of-way in a stiff breeze. The neighbor kid burned ours down long ago, but the few still remaining have been claimed by moss and mold and an army of microorganisms and are trying to be one with the earth again. But the garbage man always made it through. 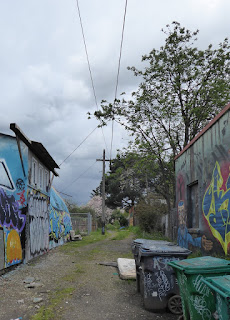 Somehow something happened on a city level in the way of improvement and the garbage route territories got parceled out and everyone got city recycling bins and yard-debris bins and the trucks got so large and fancy, to handle all the new stuff, they quit using the alleys and started coming down the streets.

The alleys started to change. It seemed to happen organically, but that’s not really true. Individual homeowners made decisions, big and small, that changed the alleys, and they began to meander, like streams pushing into soft silt. Or like a toddler with no supervision. Or a drunk. Ours, for instance, is no longer straight. Some of the neighbors sensed an opportunity to enlarge their yards. Some didn’t care. And alleys have feelings too: they shrink away from aggression and lean toward courtesy. Our alley sidles toward our yard, where Dave put up his masonry wall well within the property line just to be polite. But if you want to grab a few inches of the alley for yourself, you can just go ahead and do it. It’s supposed to be a public right-of-way but nobody’s really in charge. 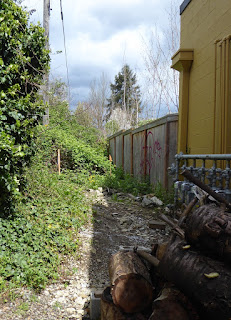 Others are impassable altogether. One was altered at the end to accommodate an RV and people to the south can’t get through. Some people decided to grow vegetables in the alley and other people decided it was a great place to stack up all their garbage. Sometimes neighbors consult each other, and sometimes they collaborate, and sometimes they just do whatever they want. Some of the alleys have been taken over by roving gangs of blackberries.

This is what freedom looks like, people. Some folks get tomatoes, some folks get extra parking, and some folks just get screwed. But nobody’s getting milk anymore. God bless America.