The Cough Drop Of My Dreams 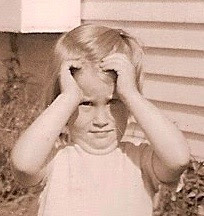 In the 1950s, every child in America had their tonsils taken out, until I came along, and evidently I was Dr. Martin’s inspiration to try leaving them in to see what happened. Dr. Martin was our family doctor. He made house calls with his black bag and called my mom “Mother.” Sometimes he’d just poke his head into my bedroom and take a good sniff and then write out a prescription. What the heck, Dr. Martin is said to have opined, those tonsils must be in there for a reason. Family lore holds that Dr. Martin said mine were “as big as hamburgers” in their normal summer state. In the winter they were often a raging mess of fire and pus-pockets. Everything infectious that came down the pike landed in my tonsils, and yet no one offered to remove them for me.

I wasn’t even that bothered by sore throats because I was so used to that particular kind of pain. Once, as an adult, I went in to the doctor with some sort of strepto-crud, and he sent me off with antibiotics and offered to prescribe something for the pain. I was incredulous. Pills for sore throat pain? Ridiculous. I told Dave about it when I got home, without the prescription, and he about jumped out of his chair. “You never, ever, ever refuse painkillers,” he drilled into me. Just as I was known for blown-up tonsils, he was famous for having his teeth blow up deep into a Friday night on a holiday weekend. 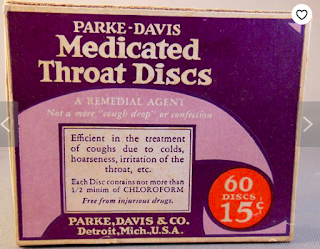 What I did hate was the awful cough that came in after the throat started to heal up. The kind of cough you could split your head open trying to suppress, and then once you gave in it was all over, and you coughed yourself into the dry heaves. And there was one thing and one thing only that could give you a fighting chance, and that was Parke-Davis Medicated Throat Discs. Major licorice flavor, which I hated, but oh boy did they work. They were a miracle. I’ve tried to find them since. I Googled them. Guess what? Someone is selling them on Etsy. Not the discs, precisely, but a “Vintage Box [EMPTY]” for $12.99.”

I began to suspect they are truly unavailable.

And on the box is a hint why. They contain “not more than one-half minim of chloroform.”

The Food and Drug Administration evidently drew the line on that in the ’70s. A minim is one-sixtieth of a fluid dram, or about three-fathomsth of a cubit. In case you were wondering.

Well, shit. Somewhere around the same time it was determined that the pharmaceutical and advertising sectors were insufficiently profitable and so then we got TV advertisements for drugs to replace the cigarette ads. Up until then doctors were presumed to be the experts on what pills we should take but now we get to help them out by asking if such and such is right for us. “How about the Pill That Starts With F?” we say, helpfully, and our grateful physicians slap their foreheads and say “Boy howdy! I’d forgotten all about that one,” and off we go with our pills, and off the advertisers go with our money. And this is why we now know exactly what we’re in for, with warnings about everything from death to anal seepage, and whatever’s in between.

So I’m not sure why we don’t get to have the good stuff anymore. The cocaine in Coca-Cola, the chloroform in throat lozenges. How bad could they be?

Also, who saves forty-year-old cough drop boxes? That degree of speculation eludes me. But not my friend Walter. I remember he saw me with a metal Chapstick container in 1973 and said “Save that! They’re making them out of plastic now.” I’ve still got it somewhere, I think.

I wonder what Walter’s got in his drawers. As one does.