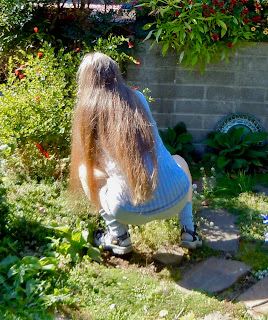 There isn’t anything complicated about my hair. It’s straight. You can describe it in linear units and you’ve pretty much got the picture. It’s been everything from an inch long to three feet long, and gravity writes the rest of the story. Don’t look for the strands to show any initiative or imagination. It’s all just going to hang there to whatever point it’s whacked off.

This means it’s not much help to put in layers so as to give the illusion that I have a normal-shaped head. Most people’s heads are round in the back to accommodate the standard Homo sapiens operating system, but my head is just flat. It’s the size of an ambitious walnut. You cut layers into my hair in the back, they all hang straight. Layer cuts give me all the volume dolphin skin gives a dolphin.
This worked out very well for me at age thirteen when I had long straight hair that didn’t even need ironing, not that I didn’t iron it once or twice. Classmates who soldiered through fitful nights with their hair on soup cans would have killed for my hair, and that was my stock, because until the tits grew in I had nothing else to bank on.
And I’ve never been able to decide what linear dimension my hair should be. The last time it was real long and I cut it off, I thought it needed to be to my shoulders at least so that I could hide my pudding neck. But that doesn’t work. My pudding neck considers itself a Feature and is somehow aware I’m never going to threaten it with surgery, so it just flops out there, shameless. Doesn’t matter what angle you take the picture, my pudding neck photo-bombs my head.
Then I sheared my hair off to a nice stand-up crewcut in case that would volumize my head but that required Product and attention, and even then it was still flat in back. So I let it grow out and hoped at some point I’d know when to say “When.”
And I have! My trusty barber has managed to take the limp shower-curtain look out of my head and it got to just exactly the right length and now I have a Look. Wrap a scarf around the pudding and I’m good to go.I went back today for a trim and asked her if she could cut it without making it shorter. English isn’t her first language so she did not have a large bullshit lexicon to draw from. She just said “No.”
Okay, cut it anyway, I said.
The fact is I would get my hair cut every week if I could. I would pay someone to just fiddle with my hair. Every follicle is attached to its own happiness nerve. Throw in a little electric-razor action at the nape and a light touch in the ear region and I will follow you home and roll over for a belly-rub. I still remember the feeling when Pastor Lange put his hand on my head during my confirmation as a genuine Lutheran. (They try to confirm you when you’re still the age to be weirded out by Death and Eternity but before you get to the point where you’re thinking, Now, hold on just a minute. What is that you want me to believe?) When the good pastor floated his palm over my hair, I would have told him I bought the whole story.
This is how I survived babysitting. I am not a natural babysitter. But girls of a certain age will happily play with long hair for hours as though you are their personal giant Barbie. And I will let them. I will even consider forgoing the 50 cents an hour, but think better of it later.
I’m sure I was meant to have my head patted. I was wired that way. And it’s no trouble for anyone. This is why God made me short. I think that’s what Pastor Lange was trying to convey.
By Murr Brewster|2021-11-29T16:39:45-08:00November 17, 2021|Uncategorized|20 Comments