The Edge Of Flight 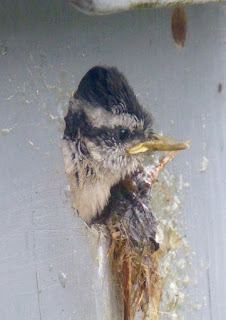 I haven’t gotten as much writing done lately as I’d like, because I had to watch my soaps. And a lot of the plot lines were interwoven and I didn’t want to miss anything. And things seemed to be coming to a climax. And they did, a couple Sundays ago. Holy shit, what a tight drama! I didn’t get nothin’ written that Sunday.

They set you up to think everything’s going along smoothly in order to build the tension later. Mr. and Mrs. Nuthatch moved in and got the house in order and dribbled pine resin all over the front (is that a red herring, or does that figure in later?), and in short order they had eggs going and Mr. Nuthatch is bringing in flies and such for the Missus, which is why I call him Dave, even though I suspect that’s not his real name.

After a few weeks, there were definite beebly-beebly sounds coming out of the box, and both Dave and the Missus were going in and out with fine selections from the Arthropod menu. 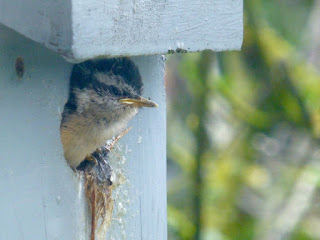 Then, one day, a little face poked out of the nest box hole! [Music swells.] And I WILL BE GO TO HELL IF IT ISN’T A LITTLE FUZZY NUTHATCH even though nothing ever came out of that thing but chickadees before. They’re so SMART! Then the pace picks up. Dave and the Missus are hauling in bugs at what looks to be an unsustainable rate [sound of freight train picking up speed], pausing only to rout interlopers, most significantly a scrub jay that has been observed to repeatedly land right on the nest box [shark music], although he always slides off. Still: tension builds. The scrub jay is so big the nuthatches don’t even try to chase it off, but sit nearby and beep at it furiously.

Then comes Sunday. A baby nuthatch is sticking its head further and further out the hole and even gets a foothold on it, but I’m onto this. I already know it’s fake. Last year the chickadee babies had me holding my finger over the camera shutter all day long while I waited to see the first flight, but they kept doing that for, like, a week, and eventually I gave up and missed the whole thing.

Meanwhile, Dave and the Missus are in the tree, honking alternately, and because they’re on slightly different pitches, it sounds like a little kid’s tricycle horn. Aanh-eee, aanh-ee. And the nuthatchlet is honking too. He’s beeping like a big boy; no beebly-beebly for him. I put my camera down to admire all this and ALL OF A SUDDEN HE JUST TAKES OFF IN A STRAIGHT LINE AND SNAPS ONTO A BRANCH! Holy SHIT! What a CHAMP! And then he turns around and flies to a nearby branch, which he lands on upside down, and he hangs there like a tree ornament for a few seconds, all confused, and then lets go and flies off into the crape myrtle, with his mama in close pursuit. YES! My first confirmed first-flight sighting! But wait! There’s more!

Another fuzzball is peering out of the nest hole and honking away, but it comes out squawkier. I think this one might be just a day behind or something, and his voice hasn’t changed all the way. But then ALL OF A SUDDEN HE TAKES OFF TOO! But he doesn’t get quite horizontal. He lands a little low. And then he takes off again and fetches up on an even lower branch. He’s not as strong. Mr. and Mrs. Nuthatch are standing by doing the tricycle horn big time. And then he takes off yet again and lands somewhere below my window, and I can’t see where, but there are soft bushes to land on, and he wasn’t exactly plummeting. I watch for a while–parents are going apeshit, honking–and I wonder if there’s a cat down there, and just as I decide to go outside and make sure there isn’t, a SCRUB JAY EXPLODES OUT OF THE BUSH AND FLIES WAY UP TO THE TOP OF A CEDAR TREE and Mrs. Nuthatch is right on his tail. AAAAAAAAGGGHH! CALL 9-1-1! CALL 9-1-1!

Tune in next time for the exciting conclusion.