The Final Days Are Awesome

It’s amazing how much stuff we know! In my lifetime alone–and do not be fooled by appearances, I am but an eight-year-old in a wrinkle suit–we learned that the continents are moving around. I was still in high school.

And it was barely forty years ago that I first read that our worst pollution problem might be carbon dioxide. This was startling. We’d been assuming all along that the dirty smudgy sorts of pollution were the big problems, and if we could keep the black crap from spewing out of our smokestacks, and if we picked up trash on the roadways, and saved the whales, we’d be in pretty good shape. Carbon dioxide was not on our radar.

We certainly wanted the whales saved because they are intelligent and majestic and worthy. But it’s only been a few years since we learned how essential they are to the ocean ecosystem, because they forage in the deep where the nitrogen is and come up for air and poop it out as the surface, which jump-starts the whole food chain. No whale poop, no phytoplankton. Who knew? Now we know. Amazing.

Science zigs and zags but marches on, occasionally getting things wrong, and correcting them later. This is exactly as it should be. You looking for certainty, religion is your game.

I’m not sure how we got here, as amazing as our knowledge is, but now most of us are not only science-illiterate, but we don’t even understand how science works. Otherwise you’d never get so many people to actually believe that 99% of the world’s climate scientists are pulling our legs about global warming. What they are doing, of course, is collecting data from all over, and developing computer models using the data, and testing hypotheses, and publishing their results, which are then reviewed by their peers, who are–or should be–their stoutest critics.

Instead, a lot of people have been persuaded that they are sitting around their little labs pulling in grant money and plotting to manipulate their results so as to bring down the entire world economy that is run on oil. Ha ha! Why would they do that? I don’t know. Because people made fun of them in school and now they’re secretly conspiring to get everybody back? Who do they think they are? Bunch of smartypants in unattractive lab coats who think they’re better than everybody. Same people who told us coffee would kills us, and then changed their minds a month later. They’re scam artists.


People didn’t used to reflexively dismiss the most educated among us, but now they do. Some corporate shills realized they could make bank on our insecurities to create doubt in the minds of the people. It was a calculated and deliberate effort, and now here we are, in quite a pickle, without the political will to save ourselves. 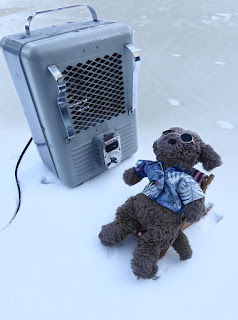 Most of us are not accustomed to looking beyond the narrow slots of our own lifetimes. Until very recently, people sought out caves for shelter and socked away fat and berries for the winter, as their ancestors had done for hundreds of thousands of years. But somehow, now, most of us think it is completely normal that even though we get winded running for the bus, we can walk into a metal tube in California and be in New York City in six hours. We think it’s so normal, in fact, that we bitch about it if we spend an extra hour on the tarmac.

We simply do not comprehend what a very special time we’re living in. This unprecedented luxury feels like our birthright. We don’t want it taken away. And we can’t imagine why anyone would want to take it away.

Right now a group of people are making a stand against a pipeline. They want to protect their water; some of them want to protect sacred sites. It’s just one pipeline segment, but they have a lot of support from people like me who witness their bravery and recognize their stand as being the spearpoint in the fight against catastrophic climate change. When we make our case, we’re mocked. I’ve never seen anyone protest the oil truck coming to their house in the middle of the winter, writes one wag on the internet. We’re hypocrites, in other words.

If this is how you see us, this message is for you:

Aw hell no, Sugar! We’re like everyone else. We love this stuff. I can get in my car and expend four calories with my right foot and be walking on the beach in an hour? Awesome. I can flick my index finger and make my house cold enough I need a sweater in July? Outstanding. I can drive to the store in January and buy fresh salad greens from a thousand miles away and then just toss the plastic box in the garbage? Baby, oh baby! We are living better than kings and queens, every one of us, even if we don’t fully appreciate it, and all because we’re digging up a finite fossil swampland and burning it up as fast as we possibly can, right now. We haven’t been doing it for long, and we won’t be able to do it for much longer. But right now? We get to have all this swag.

And there ain’t an environmentalist with a beating heart that wouldn’t want to keep that up if it were possible. And if it weren’t going to seal our doom.

Look at us! We never even had the first clue about the whale poop and the plankton, but we’re willing to allow half the world’s species to go extinct on our watch, and cross our fingers it all works out. Maybe we still feel safe; maybe we live on high ground, and still have air conditioning. Meanwhile, we won’t even take in a Syrian victim of terrorism in case she’s a terrorist; but in a few years, entire populations are going to be on the move. Climate refugees, trying to survive. If we’re not interested in making room, and sharing our stuff, we could start by not assuming scientists are frauds.