The biggest living thing on earth is several thousand years old and covers over 2300 acres in the Blue Mountains of Oregon. It is a fungus. One fungus.

It’s a little like calling Tokyo the largest person. But the point is well taken. There’s way more to your average mushroom than you can see. Mushrooms are grabby. You might think you’ve plucked the whole thing but its tentacles are in the next county. This is one of the reasons people are thinking that tilling isn’t the best idea. Not only do plants use their roots to suck up water and nutrients, but they hijack the huge network of fungi to their ends, too. The thinking goes, it takes a mycorrhyzal village to grow a tomato. Every time you stick the spade in the ground, you’re disrupting a major nutrient highway.

That’s how those circles of toadstools called fairy rings work. The beginning of the operation is in the center, and the fungus travels out in every direction before sproinging into fruiting bodies, like fireworks. As a short person who can’t jump, I admire fungi and their ability to spread. Dave and I are earthbound. We bought the house next door, and that’s about as far as we can go. Fungi could buy up all the red properties in Monopoly and still have enough poop to go for Marvin Gardens, on to Park Place, and over to the Parcheesi board.

I admire fungi, but I also harbor them. Now, I’m fortunate in my health. My vital signs are hoppin’. I never have had the flu. You don’t even want to know how much garbage I can eat and drink before my gut puts in a mild objection. Viruses pass through me like a ghost through a wall. Bacteria schedule their conferences in other locales. Even mosquitoes change their flight patterns to avoid me. I’m lucky.

Fungi, though, want a lot of room for their tentacles to blossom. They are grabby and tenacious and hard to get rid of because they spread so widely and thoroughly into any suitable substrate: rotting logs. The Blue Mountains. Poop. And me.

I’ve had a fungal infection called Tinea versicolor since I was a teenager. Mildly itchy white circles appear on my upper body and spread and coalesce into a Michael-Jackson-like patchy pallor. A good thirty years in, my gynecologist, who probably gets tired of looking in the same places, noticed it blooming on my shoulders and prescribed an ointment. I had to be really diligent with it for a couple months and then it was considered eradicated.

Then came the day when it occurred to me that maybe toenails weren’t supposed to be yellow and tubular. “Do you think this is a fungus?” I asked my massage therapist Maria, wiggling my toe, and just before leaving the room to scrub her hands with a belt sander, she said yes. So I went home and looked up cures on the internet. I found the following from the reputable Mayo Clinic, and I quote:

“Toenail fungus is stubborn. You might try {emphasis mine} a combination of vinegar baths and antifungal ointment applied twice a day for a fucking year and see if that helps.”


The Mayo Clinic has an attitude. 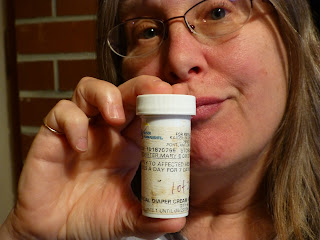 Maria told me I should file down my toenail. Filing gives me the heebie jeebies and I don’t own an emery board. Dave sprang into action. Next thing I know he’s in the basement and I can hear the whine of a power tool. I do not know what he is doing, but it seems appropriate to the obstinacy of a fungal infection. He was making himself a stick with a handle and he wrapped sandpaper around it and he filed the living crap out of my toenails. All of them. They have never looked better. They don’t look good.

And I have one additional fungal infection. It doesn’t have a name. My doctor didn’t know what it was, but she said it “looked fungal,” and she wrote me a prescription. Usually when you get a prescription, it has the decency to be called something like Flexoniurbum Biflatulate. Not this one. I’m not going to tell you anything more about my fungus, except that I’m treating it with a bottle labeled “special diaper cream.” I don’t even want to know where the tentacles are.