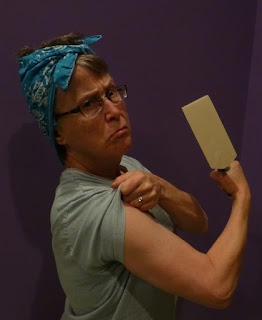 I’m kind of pleased, actually. I just installed a kitchen tile backsplash all by myself. Just me and the Sales Associate I cornered at Home Depot until I’d extracted everything he knew about tile-setting. And that’s not easy. You have to keep turning your shoulder on the people piling up in the aisle determined to nab him next; you need to pretend they’re not even there, no matter how close they edge up, no matter what power tools they may be brandishing. A person like myself, who was brought up by a really nice Lutheran woman from North Dakota, does not normally have the emotional tools to withstand that sort of pressure. But I held out, right down to the grout float and sealer instructions.

Yup, installed it all by myself. Unless you factor in Dave, who stationed himself outside with a tile saw to make cuts on demand. “What’ll it be?” he’d say, and I’d hand him a tile and say, oh, three inches, ‘ish,’ and he’d say “ish?” and lower the eyebrows of scorn.

Dave is comfortable with a tile saw. Can operate a forklift. Can park a tractor-trailer. Can wrangle mathematics well enough to slip a star-shaped tube at an angle into a squid-shaped boiler so tight a fart couldn’t get through. Can, let’s face it, keep a dozen bricklayers in cuts and material so efficiently they don’t have time to wander off for a beer. 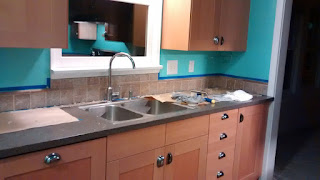 “Ish,” he repeated, scowling, and handed me a sharpened pencil. If there was going to be a mistake on this project, it wasn’t going to be his fault.

The Home Depot guy talked me into a peel-and-stick mat instead of mastic. It’s strongly adhesive. You cut it just so, and peel off one side and stick it to the wall, and then when you’re ready you peel off the other side and stick on your tiles. For a small project like this it’s not much more expensive than doing it the regular way, and it’s easier for beginners. You do have to get it positioned just right. If you’re a little off, and you try to pull the mat away from the wall to readjust it, you might take a divot out of the wallboard. Mice would be waiting right there on the other side with their little suitcases.

So I made mistakes. The eighth tile I tried to stick on kept falling off. I was in despair: I had this whole mat up, and it wasn’t working! It took me almost a minute to realize I’d merely neglected to peel off the protective cover.  Ha ha! Whew!

I did that five more times. 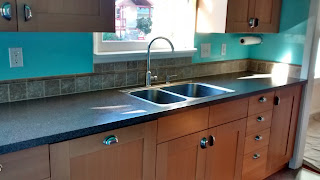 But it’s done. It’s not too bad-looking. It’s got flaws, but I’m pretty sure if I had it to do all over again, I’d get it exactly right. That is, if I did it tomorrow. I have a protective cover on my memory and rarely get around to peeling it off in time for new information to stick. I’ll admit that.

Anyone who repeatedly loses her grout float even though she’d set it down two minutes ago and hadn’t moved five feet has to admit that.