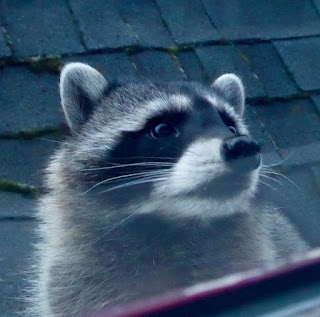 Well, shoot, something must’ve been in the air, because yesterday we got our first ants AND our first raccoons of the year. The ants were rolling around snickering on the roof and the raccoons were marching in a purposeful little line from the back door. Or maybe it was the other way around.

I don’t have a big quarrel with the raccoons. We can even go a few years without seeing any, although I suspect they’re around even then. It’s remarkable how elusive they manage to be whilst being so substantial. If a really large cat swallowed a basketball and it got hung up just at the rectum, it would look like a raccoon. Cats can’t swallow basketballs, of course. You’re thinking of Labrador Retrievers. 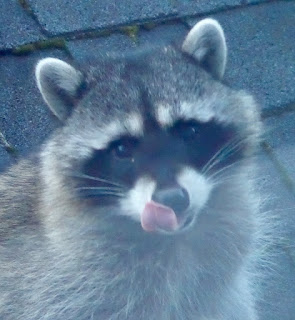 Dave did have a big quarrel with the raccoons once. He was peeing behind the tool shed, as one does, with his business well in hand, and turned to find a committee of raccoons watching him, and wondering if he had anything he wanted to share with the class. He did not. It was a bit of a standoff and obviously he negotiated an exit, but you know there had to be that moment in which he was reviewing just how much of a threat a raccoon is. They never seem to come after you directly, and you’ve never heard of anyone with personal raccoon damage, but there’s something deeply untrustworthy about them. They just don’t fear us enough. If I had my hand on a private portion of myself I was particularly fond of, I’d be alarmed. 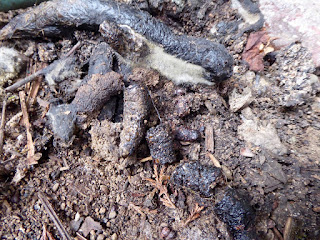 I do keep a compost pile, and have yet to observe anything untoward rooting around in it, but that’s probably because it’s guarded by attack scrub jays. You’d have to be a complete idiot to take on a scrub jay, because they’ll stab you in the head as soon as look at you. So I don’t know where these large mammals are hanging out when they’re not doing the moonlight dance on our roof. I do see their poop. It could be opossum poop, but raccoons are said to use latrines, and this poop tends to be all bunched up in the same place, under our grape arbor. If you spend any time online looking up raccoon poop, and who hasn’t, you will find yourself strongly advised to remove your raccoon poop latrine, so as to avoid getting raccoon roundworms. I’m not real worried about that. You get raccoon roundworms, it says here, by ingesting raccoon poop, and that wasn’t anything I was planning to do. You’re thinking of Labrador Retrievers. 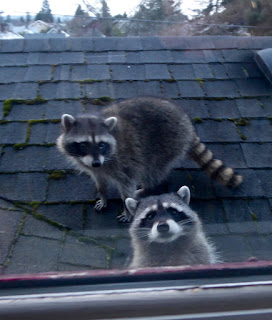 I’m doing the regular thing with the ants. I give them a couple squirts of ant poison in a sweet gel and they scarf it up and take it to their nests, in the form of themselves, and then drop dead, are briefly mourned by their colleagues and are, themselves, eaten. It seems disrespectful but it’s tidy and efficient, I suppose. I should probably feel bad about my treatment of native fauna but I understand that there is no ant shortage.  In fact, there are more ants than there are anything else. Besides, they eat their dead. Who does that?

Labrador Retrievers, probably. They’ll eat anything. Or they’d at least roll in it. Which is fine, as long as they don’t do it on my roof.