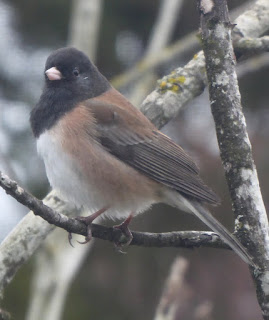 When you do start noticing birds, you find yourself becoming familiar with their habits. You might notice that the juncos, for instance, park their fannies on the feeder and hoover sunflower seeds. If the seeds still have hulls, those go flying off like Frisbees and the meat goes down the hatch and it’s on to the next seed. That’s not a big feat–I’ve seen Norwegians do the same thing. But a chickadee pops up and takes one single sunflower meat out and runs to the nearest branch with it. It then pins the meat down with one adorable little toe and shaves it down until it’s gone, and then it thinks about maybe going in for another. They’re very dainty. The chickadee is eating grapefruit sections with a serrated spoon, pinkie extended, and the junco is on the beanbag chair dumping a bag of chips in his face.

I’m assuming the chickadee is a pluck-and-go guy because he’s cautious. This doesn’t seem to be a factor with the juncos, who actually spend less time at the feeder proper than they do on the ground underneath. That’s where they spend most of their time, which is a pity, because so does my neighbor’s cat, Sid. Juncos don’t care. They look around and all they see is other juncos all over the place and they figure odds are it’s some other guy who’s going to get whacked. 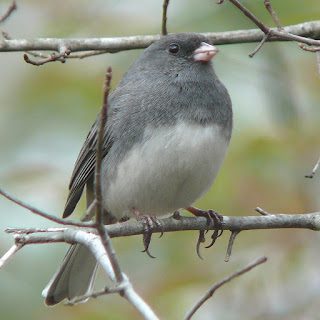 I have gobs of juncos and they don’t look alike. They have white outer tail feathers and they flick them when they fly, and that’s about all they have in common. We have dark-headed ones and gray-headed ones and ones with brown sides and ones that are only gray and white, and every last one of them  is called a Dark-Eyed Junco. When I visited my sister in Colorado, I saw some real cool-looking bluish birds with rusty backs. I’d never seen them before, but they acted like juncos. And guess what they turned out to be? Juncos. Dark-Eyed Juncos, just like mine.

It’s a little disheartening when you’re already a sort of shitty birder and you’ve spent all that time peering through your binoculars and totting up all the ways your birds are not at all like each other, only to be told they’re one and the same. You’ve got one wearing a gray vest and a dark topcoat, and one with an executioner’s hood, and one is mostly gray, and one might even have a corporal’s stripes on his wings, but you do not have four different birds there. You get to add only one of them to your Life List. You can score a different junco if it turns out to be a Yellow-Eyed Junco, but he’s about to be on the other side of Trump’s wall. 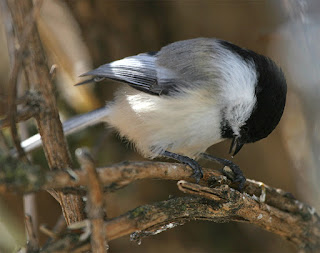 Meanwhile, we have three different brands of chickadee here, the Black-Capped being the most common, and they look different from each other, but no more so than the Dark-Eyed Juncos do. However, elsewhere in the country, you might find yourself in territory shared by the Black-Capped and the Carolina Chickadees. Good luck telling those bastards apart. Evidently there’s a line north of which you have your black-capped and south of which you have your Carolina, but unless one of them has a drawl, there ain’t no difference between them. One is the eensiest bit greener on the back, until the light changes, and the other is slightly less fluffy, unless it’s cold. I recently gazed at painted renditions of the two and I couldn’t tell them apart even with the captions and arrows pointing out the differences. You want to add a Carolina chickadee to your life list, you can probably put a black-capped in a shoebox and drive south with it.

The good news is Sid the cat got run over by a car. My neighbor has his ashes and I invited her to sprinkle some under our bird feeder, since that was his favorite place to hang out. She said she would. Maybe if all those different juncos figure out who to bang this spring, they can use the calcium for their egg shells.