The Marge And Studley Show: What Now Edition 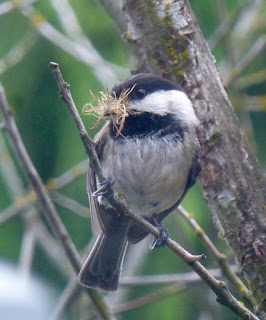 Well, you just never know, and this whole eight-year enterprise in chickadee rentals has been one long exercise in just never knowing. Through it all, our admiration of chickadees has only increased, along with our own humility and frailty in the face of adversity. This is life, and life has its ups and downs and sudden screeching halts to it.

It started with the bird box Dave built according to Google directions, with its dimensions exactly yea-by-yo, and its freakishly specific drop-depth, and its entry hole precisely one and a quarter inches, per spec. And when we scored authentic chickadees with it, we were pretty chuffed. After all, how many rotten tree cavities are there around here with those exact requirements? Could Nature even pretend to compete with the mad skills of Dave? Clearly we had elevated the housing stock in the area and we were prepared to be the very best chickadee landlords we could be.

But it’s been one thing after another. The first few years we achieved invisible chicks, judging by the activity and the cheeping and whatnot, but we had to take it on faith. Then one year everything got started on schedule and the nest was abandoned. That was followed by the Year of Dead Chicks and Punctured Eggs. Then there was the dreadful Nuthatch Fiasco of ’16, the likes of which I hope never to see again. Those nuthatches were as earnest as they could be but nothing went right for them at all.

Which brings us to this year, when I have been terribly excited by the prospect of monitoring Marge and Studley whilst actually knowing which was Marge and which was Studley, because Studley has a bum left foot. And no sooner does Marge start putting her mattress together than they both go away. Instead there are wasps.

So I haul the box inside for a look and unscrew the top and there’s a small active wasp nest hanging from the ceiling like a chandelier. Marge’s mattress looks to be nearly done, but there’s no Marge. The Windowsons like to eat bugs but wasps are too spicy. I scraped off the wasp nest and re-hung the box after waiting a day to befuddle the wasps. I also took down the hummingbird feeder in case that was attracting them. Ten seconds after I shut the window a wasp came back to the house.

And maybe he was just trying to figure out what happened to his nice sculpture and he’d go away and pout. But how to get Marge back? Staging? Hanging a little picture of Marge’s grandma? Laying in some potpourri that smells like chocolate chip cookies?

Besides, what’s next? A plague of parasites? Hordes of Huns in hawk suits? Interference from the neighbor’s Wi-Fi? Will it turn out that the Mercury in Retrograde crap affects only gullible humans and chickadees? 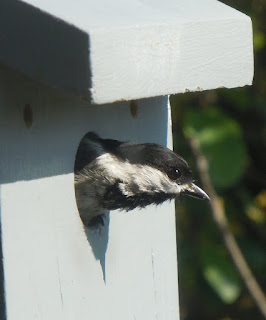 Odds are Marge and Studley are already off looking for new digs. I wouldn’t blame them. We had a working cascara tree when we first put up the house. Now it’s ninety percent dead and the birds like that too, but there aren’t many leaves left and the birdhouse gets a lot more sun. I’d already thought about hanging an umbrella above it. No one wants to try to hatch a poached egg. How much intervention do our little friends need?

When you make the perfect bird house you like to think you’re providing something for the community, but that’s just what you tell yourself. The chickadees will figure something out. We have the box one foot away from our window because we want to watch. We put out a seed feeder and hang suet because we want to watch. But birds can share diseases at a feeder. Beyond hosing cats and planting natives and leaving seed pods to ripen, maybe we shouldn’t be doing anything at all.

But. We want to watch.