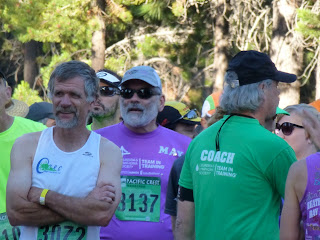 Six months ago my friend Max said he was going to train to walk a marathon to benefit the Leukemia and Lymphoma Society. The “society” bit makes it sound fancy, but don’t be put off–it’s just an outfit dedicated to finding a cure for blood cancers, one of which had its way with Max for a while. We’re all tickled that he has recovered, as evidenced by his willingness to tromp for 26.2 miles on pavement, and it also makes him an Honored Teammate. He’d trained for a half-marathon earlier and was quite taken with his teammates and his coach and the whole bust-your-balls-for-charity approach. It does seem like a weightier undertaking than, say, counting birdies all day for Audubon, and people who are donating money like to see you all sweaty with a number pinned to your chest. So for the past few months Max has been learning how to walk fast and walk smart and get the right shoes and the right socks and the right gait. I thought: good on you, Max! Way to go, you big dummy. 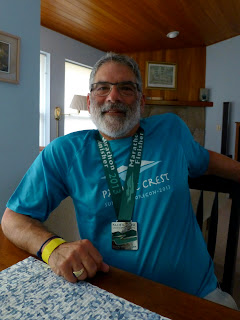 Because I’d done this before. I’m no runner, but when I got shanghaied into doing a walking marathon, I couldn’t see a downside. I was in my thirties and could knock off thirteen miles walking in my sleep, and shoot, all you have to do then is start over and do it one more time. I got Dave to go, too. We didn’t train at all and on the big day we showed up with old sneakers and cotton socks and took off like we were shot out of a cannon. Our first half was at a blistering 12-minute-mile pace, and our second half degenerated into a sludgy, screamy, pain-filled, I’d-jump-off-the-bridge-if-I-could-swing-my-leg-over-the-railing, puke-bucket of a slog, in pus-filled socks. A mile from the finish line spectators lined the route and clapped and cheered and told us we were almost there and I told them to go fuck themselves, but they couldn’t hear me because I’d run out of saliva.

Anyway I assured Max he’d be just fine. We’d survived it, and if we could do that with no training, just think how great he’d be! Refreshed! Invigorated! He’d be a human bouquet of spring daisies at the finish line. He’d be a brace of big-eyed gamboling lambs in 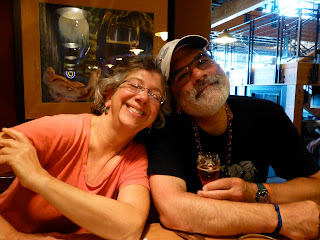 running shorts. Sprightly animated Disney characters would float above his head playing trumpets and piccolos. He’d be just fine! And we’d be honored to be there for moral support. He’d knock it out of the park.

Dave got that squinty pained look he gets when he’s trying to rein in his eyeballs before they roll back in his head, and said: you know. We were in our thirties and we thought we were going to die on the spot. Max is sixty.

Well! That is true. But he’d be just fine. 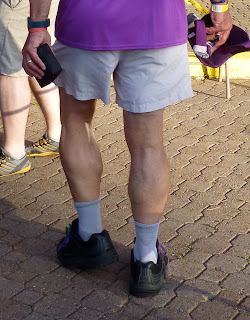 We got into it, actually. Max was doing all the work, and we agreed to scoop him up at the airport and drive him to central Oregon for the event. We talked our friend Linda into flying out from Boston just to cheer. We rented a house. We laid in a stash of celebratory beer. We practiced clapping so we wouldn’t blister our hands on the big day. We got up at the crack of dawn to drive him to the starting line. It takes a village, and we were his villagers. Now it was all up to Max and his magnificent sixty-year-old calves. What could go wrong?