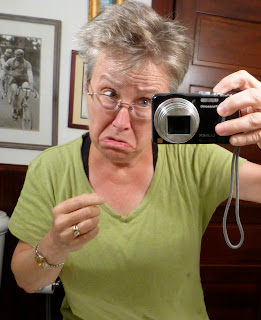 I brought up the Left-Gaze Bias in the last post. Evidently, we humans look at each other most avidly on the left side as we’re facing each other (the gazee’s right side). That’s where we have learned to read each other’s emotions, because that’s where they leak out, propelled by our emotional left brains. But this bias also has implications when it comes to looking in the mirror. When we look at ourselves in the mirror, we look at the left side the most. It’s just force of habit. Ideally, you should be well enough attuned to your own emotions that you don’t need to check out your right eyeball to find out what they are. But the problem is that the mirror has the sides flipped, so we’re no longer looking at the tell-tale side, the side that everyone else looks at. That means we tend not to like photographs of ourselves, because they’re all backwards and the eye we’re used to looking at is on the wrong side. When I see a photo of myself, I instantly notice the gigantic mole on my right eyebrow, which looks unusually prominent because I’m usually looking at the other side in the mirror. This means when other people look at my face, they’re looking at my mole. And they can read my emotions. My primary emotion is “shit. You’re looking at my mole.” 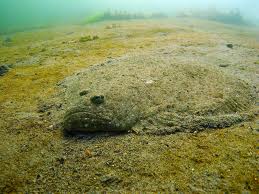 This is not a problem with all animals. Flatfish start out looking like regular fish with an eye on either side of their skinny vertical bodies and then one of their eyes begins to migrate over the top of their head and joins up with the other one, and they flop over ninety degrees and drift to the bottom of the sea and gaze up with both eyes now on the top side. When all is said and done, it doesn’t look right. It’s never even. If young flatfish ever do try to look at each other’s right side, next time they meet they might find the entire side has shlorped over to the left side. This would be fatally disconcerting, in a social sense, and so it is assumed that flatfish are not well developed emotionally.

In some social situations, this mirror business causes problems. Many times when people take photos of themselves to use in, say, social networking sites, they snap a photo in the mirror. This is one of the 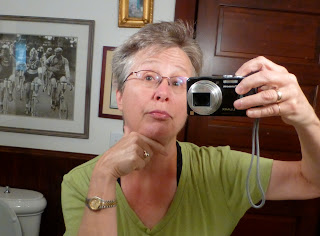 reasons people complain that the person they met on line does not look at all like his picture. When Heather goes to meet that cute boy Jason she met on line and is disappointed in him in person, it might be because Jason had taken a picture of himself in the mirror. Also he’s forty-seven years old with soiled pants.

Mirrors have been used by scientists to gauge self-awareness among many species, including humans. In the typical mirror test, a bit of schmutz is dabbed on the animal in a spot it could see only by looking in the mirror. If he reaches out to the schmutz on himself, he is said to pass the mirror test. That is, he recognizes that the image in the mirror is him. The human child undergoes a predictable pattern of responses to a mirror. At up to a year, the child sees the reflection as another possible playmate. Self-admiring begins at one year, followed by avoidance behaviors, which go away and do not resurface until menopause. 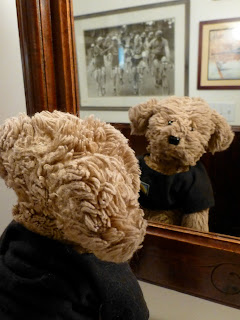 Not too many other animals pass the mirror test, but among them are all the great apes. Lesser primates have been shown to be significantly less narcissistic. Pigs can use a mirror to find food, but because they really do not give a rat’s ass how they look or how much schmutz they have on them, human scientists have assumed a lack of self-recognition. Cows are not expected to develop self-recognition until they evolve fingers. Results with rutting elk and mirrors are inconclusive, but seem likely to result in seven years of bad luck.