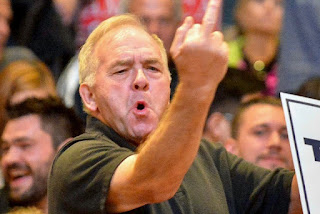 Early in our relationship, Dave and I had a little disagreement, and I got mad and punched him in the arm. No chance, I figured, I could do the big guy any harm, but it was not a playful punch, either. Just before I could get a second punch in, his hand stopped my fist cold in mid-air, and he carefully lowered it, and he said “We don’t hit.”

Oh, I remember thinking, That’s another possibility.
There’s been no hitting since. It takes a while, when you’re still basically children, to learn how to disagree efficiently and with the least amount of emotional shrapnel. I have no idea why I did this shameful thing, although there surely was alcohol involved. I certainly never witnessed anything like that in my family. No one in my life has ever hit me, either. I think, to tell you the truth, that I saw it on TV, and that at the time of the argument it suggested itself as the thing to do. It was, as they say, “modeled” for me.
This embarrassing admission is brought to you by news of recent event at a local middle school. Boys are slapping girls on the ass in the hallways on what they call “Slap-Ass Fridays.” Girls are speaking up and walking out. And for some reason, fights are breaking out all over the school. Lots of them. Nobody seems able to stop it. Innocent kids are being thrown around. It’s chaos. They’re bringing in the police. We’re talking twelve-year-olds.
What the hell is going on?
I guess there were fights when I was going to school–grudges settled under the bleachers, that sort of thing. You always figured some kids just had it rough at home. Except for a couple boys brawling at the school bus stop once, which utterly terrified me–I ran away with my hands over my ears–I never witnessed any of it.
So this seems ominous. What is being modeled now?
Well, for one thing, all across the nation adults are storming school board meetings and town halls, bellowing and flailing like quarter-ton toddlers, complete with spittle. Grown men and women are surrounding private houses of duly-elected officials in gangs, with the specific intent to terrify. Profane death threats are piling up in the inboxes of anyone with the audacity to serve in government. Hit lists are being drawn up.
People are showing up in the public square bristling with arms. Like little Kyle Rittenhouse, they’re looking for trouble, and they’re finding it, proving to themselves they are right and righteous, even if they had to manufacture their trouble themselves. They’re hauntingly oblivious of their part in the play. Everyone’s on their own side.
And this is mostly a right-wing phenomenon. Sorry, that’s just a fact. There is a small but deliberately provocative contingent of black-clad elements on the left, the challengers, the dumpster-burners, with a minor tally of victims, and an outsized reputation among those stoking right-wing resentments, but all are unwittingly in the same family: the family of the enraged. And all fight with rage and succeed only in making more and more rage.
Civility is now considered quaint and weak to the players on all the edges. But civility is not the same as acquiescence. Civility is the bare minimum of courtesy in the social contract that allows us to coexist. Civility is what gets us from here to there, and in its absence, hearts harden up, and we get nowhere, ankle-deep in casualties. We need to start pulling our punches.
By Murr Brewster|2021-11-29T16:39:42-08:00November 20, 2021|Uncategorized|20 Comments