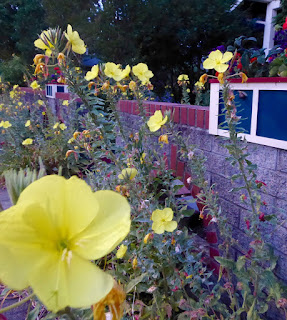 It is a wonderful thing, the fabric of life. No sooner does one cut a notch out of it that something notch-shaped shows up to occupy it, the way weed seeds roll into a sidewalk crack. We don’t even know the half of how any given ecosystem works, with its long, laced fingers, its slender webbed strands. Japanese whalers probably thought if they transferred the whales from the oceans into their mouths, there’d be that much more room for fishes–that’s the sort of conclusion you draw when you start with the premise that whale is delicious. But it was not the case: the system evolved with whale poop and began to founder without it.

You strip all the milkweed from the Great Plains in order to grow Wonder Bread and hamburger, and all the monarch butterflies disappear. And yet, if you get enough liberals to plant milkweed amongst their arugula, a few expatriate monarchs show up again, like magic. For every molecule that drifts by, there’s an antenna yearning for it.

It was a source of amazement to me when we planted our first asparagus patch some forty years ago. I believe we may have had the only asparagus patch in a square mile. And I’ll be dogged if we weren’t soon playing host to the only squadron of asparagus beetles in town. Where did they come from? Who gave us away? Are there asparagus-beetle surveillance drones?

Meanwhile the sky is charged with seeds, airborne on fluffy crafts, hoping to happen upon a satisfying dot of substrate. Right here in my garden we have a number of flower colonies that we never planted, such as foxgloves and calendulas and evening primroses. They just show up. I yard out most of them and leave a few for fun. And just the other day I noticed a new plant. Upon careful inspection it revealed itself to be a western bleeding-heart. Not the fancy kind that you buy in the nurseries, but the native. This is the very plant I personally refer to as “Naked Man Climbing Ladder,” after a particularly harrowing visual event I have been unable to evict from my brain, but there’s no reason to get into that. I don’t know of any pockets of native bleeding-heart in the vicinity, and yet here it is. According to the literature the leaves are up to twenty inches high. 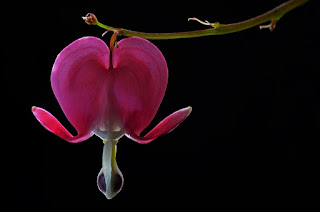 Ours are about twenty feet high.

All right, many people would take that as an indication that all was not well with our siding. In fact, I too believe it is not a good sign when an entire plant is growing out of the side of the house. This is in spite of the fact that I have honed a successful emotional strategy over the years based on willful avoidance. It works very well for me: I am a buoyant person. So, for instance, I can look at ripples in the sheetrock inside and imagine that that is just what sheetrock does, all on its own, from time to time, out of sheer exuberance. And I can notice places where the baseboard is pulling away from the wall and the paint is bubbling up and surmise this is the sort of thing that can happen as a house settles. And I can observe, on the outside, that the clapboards are bowed and flexed crazily in a vertical plane neatly corresponding to a downspout where the tower meets the roofline, and I can think: Gosh, they don’t make siding like they used to. 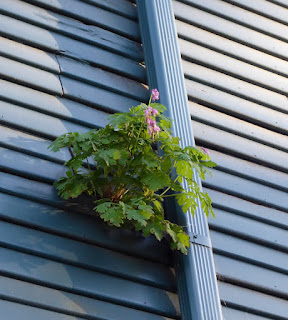 I can, that is, until my friend Mike points out the very same phenomenon and suggests gently that I might have a water problem, and then, well shit, it’s out there, isn’t it? All spoken out loud, and everything. Unraveling my finely honed emotional strategy entirely.

So there it is. I have a bleeding-heart hanging out of my siding halfway up my house. Dicentra formosa. I know stuff about plants, and I know this one will turn yellow and disappear altogether in mid-summer, shortly after it quits blooming. That’s what they do.

It will be as though my house has healed itself.

I should call a contractor. But if I can wait till the plant goes away, I’m good to go. Until the house sprouts tadpoles.