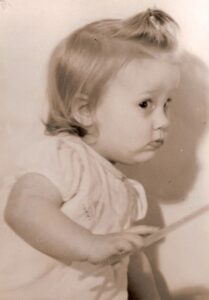 Shoot. Really doesn’t seem like I’ve been here all that long. I guess if the bus hits me tomorrow the newspaper would refer to me as an elderly woman, but if the outer wrapping has seen fresher days, the inner lining still feels springy. But just as my decades seem to fly by faster the more of them I’ve socked away, so too does history.

Until a second ago, the human story has been a long slog when nothing changed all that much. You’ve got your famines and your droughts and your wars and your conquest and your plagues and it’s one familiar thing plodding after another for thousands of years; there’s love and loss and the next plague or conquest is always just around the bend. Maybe the weaponry gets fancier but the cruelty and suffering are the same. But in my meager lifetime alone, the pace has picked up. My life is all of history in a 68-year-old capsule.

I was born between wars, just after Edmund Hillary—and the brownish Tibetan guy that doesn’t count as much—conquered Mt. Everest. Elizabeth was crowned queen of England. My parents were terrified of polio. A vaccine came along and made short work of it. Our house was small by modern standards but we had indoor toilets on a sewer line. My parents, and nearly all humans before them, did not grow up with either. The sewer line in my neighborhood stopped three blocks away in two directions.

That’s because that’s where the colored section started.

You could actually tell what color someone was in my home town by whether or not they had to haul their own shit out in buckets to a truck once a week. That’s how segregated the place was. Black children were essentially invisible to us. They had their own schools. They suffered indignities or worse across the board, every day. White folks, if they gave them any thought at all, saw them as less than fully human.

What we did worry about was nuclear war. We learned to duck under our little desks so survivors would know where to look for our freaky shadows after a thermonuclear blast. Our handsome young President played a game of bluff with a crazy Russian leader.

Soon after, thanks to persistent non-violent action—on one side—requiring jaw-dropping courage, public opinion about racial equality began to turn. Civil rights laws were enacted and conditions did improve steadily for many—still a work in progress, hampered always by Jim Crow’s nephew in a subtler suit, jingling his jail-keys, but without a doubt many racial disparities were lessened. For the cause of equality, it was a low bar, but America did step over it.

By the time I was in high school, reliable birth control was finally legally available, and not too many years later abortion was legal across the land. Mandatory maternity was virtually eliminated. Women were able to control their own bodies and thus their futures for the first time in history. It was huge. It changed everything. The same decade, there was a small uprising in a bar in New York City and the concept of gay rights came into the mainstream. For straights, reflexive ridicule turned to shrugs and then acceptance as a result of sustained political pressure and—even more important—people daring to come out.

The Berlin Wall came down. Non-proliferation treaties were signed. The threat of nuclear annihilation retreated. A Black man was elected President. Gay marriage was legalized.

Politicians desperate to maintain power lied, cheated, and stole. They worked overtime creating enemies for citizens to fear, just to siphon votes their way. A video of a murdered Black man caused much of white America to reconsider its assumptions, briefly, but then a few small bands of destructive demonstrators offered themselves up as Republican talking points and the tide began to turn back toward fear and loathing of the Other. Vaccines, weirdly, were held up as assaults on the body and on freedom, and plagues surged.

Voting restrictions barely distinguishable from the old poll taxes were put in place to specifically discourage the Black vote. A crazy Russian leader set out to obliterate a country and nuclear war loomed once again.

Abortion was outlawed. Even the right to birth control came under assault. Same-sex marriage, too. Children were not to be taught accurate history, lest they learn it. Queen Elizabeth rules still.

This is my little life. It’s a palindrome. A parlor trick. When I die, look for polio to make a comeback.

But if there’s anything to the Dalai Lama story, maybe Tenzing Norgay will be born again.