The Physics Of Murr 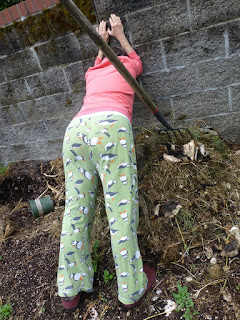 So, I skinned my elbow up pretty good, there.

On the surface it’s pretty easy to explain. I had a pitchfork and I was turning my compost pile, flip flip flip, which leans up against a block wall, and I uncovered a layer of some kind of little eggs–ant eggs? Fly eggs? I needed a closer look. But I had my bedroom slippers on and didn’t want to put a foot in the actual compost pile. So I gauged the distance to the wall and decided to lean forward and put my hands on the wall, which would put my face directly over the eggs.

Unfortunately, the wall was further away than my body anticipated, and when my hands hit it, my arms sort of caved in and my elbows were on the wall (blood ensued) and I was (also) now at such an angle that I didn’t think I’d be able to press out from the wall and get back upright, so I was stuck, unless I wanted to soil my slippers, which I didn’t.

This kind of shit happens to me all the time. I never was any good at physics. I know two laws of motion: “down” and “scabby.”

This is why my friends once saw me charge flat-out into a small sapling. I thought it was bendy, and it would bow forward, and then fling me back. Wheee! It didn’t. It didn’t move. I just crumpled up into a wad at its base.

Or there was the time I folded up the legs of a card table. I’d gotten two of them snapped up, and then, to save time, instead of flipping the table 180 degrees to get the other two, I just leaned over it because I thought I was a whole five foot nine, which I’m not, and then an unscheduled somersault occurred, and the table fell one way, into a vase, and I went the other way, into a wall, and checked (first) for witnesses, and (then) for broken bones.

All of which has led me to a new appreciation for humans,  a species with which I am often peeved. I don’t know how to turn animals into meat. My tomatoes aren’t reliable. I always have to look up how long to cook a potato. I’m not handy. I fall down a lot. I often forget how to swallow. I sometimes dream I can’t breathe, because I’m face-down in my pillow not breathing, and the only reason I’m not dead is my head doesn’t weigh much. I routinely make decisions with my physical self that are clearly, in retrospect, flawed. And yet I am alive. I am thriving. All my genes should have been edited out of the collective stash long ago, but here I am. And that is because other people pick me up when I fall down, and wipe me off, and invent penicillin, and slaughter vegetables, and arrange for clean water to show up at my very house, and (in some cases) are Mozart.