The Pipes Of Wrath 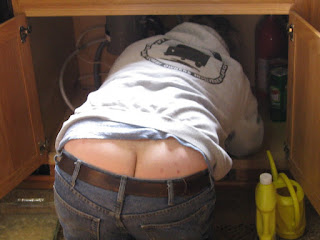 We have two plumbers whom we know by name and recognize on sight. I know what you’re thinking, but although we ask a lot of our toilets, we always treat them with respect, and they rarely let us down. It’s not the toilets.

Part of the problem is we have that cabin in the forest, and Water wants us to know what a pain in the ass it is to follow the rules in a forest setting. There’s water all over the place on that mountain but if you ask it to contain itself within a prescribed set of pipes, it goes all hippie on your ass. It’ll stage a demonstration at a moment’s notice. I’m free! water says. You can’t tell me what to do! I’m going to Occupy The Carpet if you even think about it! Fight The Man!


Then, on the home front, we’ve got the normal amount of plumbing at our house, and then we also have the rental house next door, and who knows what they’re doing over there. All I know is if you’re planning to cut someone up into little pieces and flush them down the toilet, you’re going to need a plumber eventually. Most of our renters have not struck us as maniacal, but they’ve all been musical, and it is possible they engage in a little midnight percussion on the pipes, all rhythm and freedom with a little whoopsie finish. 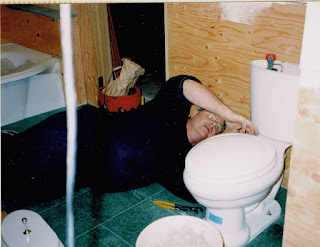 We love RW–we really do. He’s tremendous. He’s also enormous. Plumbers need to get into tight spots sometimes but all spots are tight to him. He is a giant of a man and he always wears Carhartt overalls that wouldn’t be snug on Asia. We took one look at him the first day and praised the Lord for those overalls. Then one day he showed up wearing sweatpants. The elastic had jumped ship ages before. Oh my god. Children could disappear in that butt crack. Survivalists could store three weeks’ worth of freeze-dried packets in there without anyone knowing. Tiny mules worked their way down the switchbacks starting at his tailbone and far, far below, at the bottom of the cleft, miniature rafting expeditions shot by, one by one. 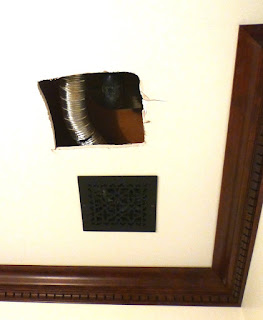 RW was on the job one day when Dave got a furniture delivery and concluded the only way to get the sofa to the second floor (because our existing stairs were too narrow) was to put them through the window-holes, before the windows went in. He set up the extension ladder and put a rope around the sofa, giving the free end to RW, the plumber, upstairs. The idea was RW would keep tension on the rope and Dave would walk the sofa up the ladder. When he got near the second-floor window hole, he had to push up and out on the sofa to try to get it horizontal, which was the only way it would fit. Dave’s tall, and he’s strong, but he’d reached the limit of his ability to get the sofa horizontal, and was just about to call out to RW to help him lower it back down again, when the sofa disappeared from his hands and whooshed into the window with no more effort than a bank-deposit in a vacuum tube. Dave shot down the ladder and in the house and up the stairs in time to see RW holding the sofa from one end like it was a Lego and asking where he wanted it.

But he installed one of our toilets with some kind of crimp in the pipe such that it takes over five minutes to fill with each flush. Crimp, loogie, whatever it is he put in there was subsequently sealed up with sheetrock. The bathtub, which we don’t use, leaked the one time a guest did use it. And now we have a hole in the ceiling above the downstairs toilet where water drips down from the shower drain one floor up.

So that’s when we call the in-town plumber, Also RW. In-town RW wears his phone on his face and sometimes when you call him he asks if we’re home now, and when we say yes, he shows up, just like that. We love that about in-town RW, although we wonder if he spends his off-hours in our shrubbery, which would be either wonderfully responsive or creepily expedient, depending on your mood.

We love them both. RW the sofa-slayer, and RW the RW-fixer. We don’t know why he’s always right spang there when we need him. But we think it’s the same kind of thing as when our dog Boomer used to sit right next to Dave’s feet at the dining room table. Folks get to know where the crumbs are going to fall.