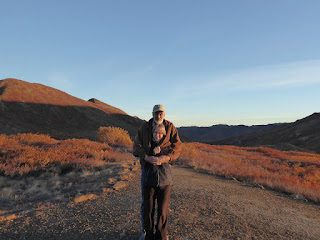 So the road into Denali does not climb Denali, or protrude into Denali, or scatter humans all over Denali. It’s a 92-mile narrow dusty ribbon that does its best to not ruin the place. We’re the intruders here, but the road instructs us well back, peasants attending royalty.

Dawn is sly on the shoulders of the mountains and then spills color into the valleys. Not just color: all the colors. Every color you ever needed. The whole box. 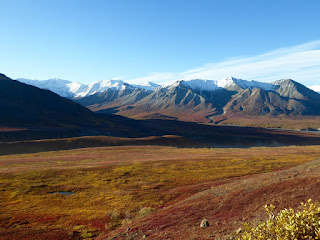 The big mountain itself is the tallest, from base to summit, in the world. Alaska is relatively new, as land masses go. Most of it is formed from whatever gets scraped off the Pacific plate as it dives under North America. Bits of this and that are jammed together and crumple up along their edges, nowhere more enthusiastically than in the Alaska Range. And that’s still rising. 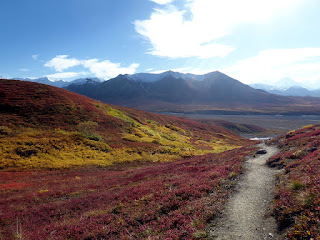 Wildlife? Sure. The Dall sheep showed up clearly, but far away, against a dun mountainside. Grizzly bears revealed themselves to good binoculars and loped effortlessly over enough acreage to make it clear that binocular distance is best. Moose tramped by, observed by a grizzly. Wolves eluded us, but wolf territory sprawled for miles in the braided-river valleys, and the possibility of wolf turns out to be so nearly the same thing as the reality of wolf that I was hardly bereft. 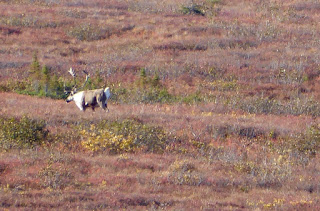 And then, there, unmistakable, was my caribou, way off in the distance. Not the caribou I had anticipated; I’ve seen the pictures, and so I know caribou are supposed to arrange themselves in long picturesque strings on the tundra against a snowy backdrop. The one in front is supposed to fling his antlers back in a splendid yet saucy posture, with the rest trailing behind in admiration.

This was just the one guy, but he was the one in front. I’ve seen ungulates before. Lots. Deers and elks and mooses and goats and antelopes and sheeps and what have you. But this one took the ungulation cake. If you can maintain that much majesty on nothing but lichens and tundra scuzz, you’ve got nothing left to prove. If I’d seen a whole string of them I might never have come to, and that’s a fact. 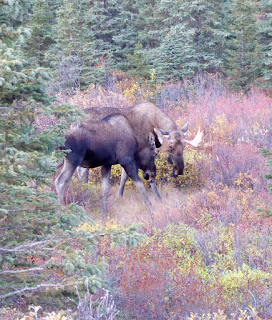 Toward dusk we and several dozen of our closest relatives happened on a much more intimate scene, when a moose grunted irritably across the road, with two admirers in tentative pursuit. Adolescents they were, their antlers the moose equivalent of a boy’s first mustache, and now and then they scraped their heads at each other half-heartedly, wondering if they were doing it right. A chesty man nearby boomed out that he’d seen a massive bull moose hanging out in the woods and that he’d probably come out soon, because–cue the nasty, knowing chuckle–“he isn’t about to let her get away.” Suddenly I longed for a more distant sighting, with no narration, and maybe–what the hell–one bull moose partisan choking on his Budweiser.

Sightings are nice. But it’s the realm of possibility that floats the heart: wolf and caribou and bear and moose and marmot and pika possibility. It’s the gratitude and humility that comes with a glimpse of how the world was and how it should be, a world in which we are clever, vulnerable, insignificant creatures of the margins. And beyond any individual miracle of an animal that might cross our path, it is the vastness and the perfection and the beauty of their rightful home that I want to gather with my eyes and decant into my soul, to sip from for the rest of my life. 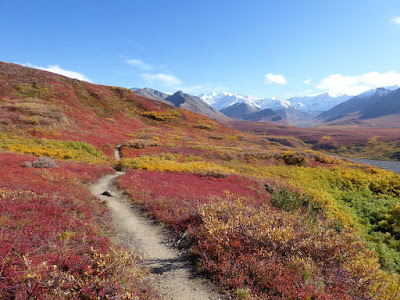