The Price Of Freedom, TBD 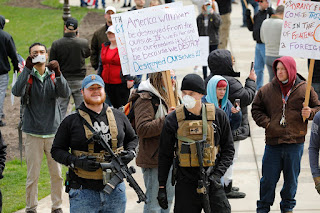 You really have to hand it to the Republicans. They can call up a standing army at any time and not even pay the soldiers. The pawns can be found everywhere, like little dormant seeds in the soil, and all the Rs have to do is plop in some manure and boom, up they spring in their little flag outfits, loud and proud and fully armed, ready to take on the enemies of the plutocracy. And boy oh boy do they have plenty of manure. They ain’t running out of that anytime soon.

Their aim is pretty transparent. They would like to be in power forever in order to funnel all the money from as many people as possible to the lucky few that own the propaganda arm, the presidency, and the courts. Of course that’s a lousy way to raise an army. You can’t get people up in literal arms by telling them you want them to work for minimum wage or lower with no sick leave and no pension and no medical insurance, just so a small number of people can own everything in the world. That’s where the manure comes in. They have to make the people believe they give one shiny shit about gun rights and abortion and [cough cough] freedom and then, just like that, they’ve got their sad little soldiers, marching as to war.

Not really sure what a bunch of people screaming and honking and wiping their noses on the flag because of a public health order has to do with the right to bear arms, but in certain circles that case can be made without any logic involved whatsoever. You could accuse your mom of trying to take your Second Amendment rights away if she runs out of Nestlé’s Quik, and nobody’d even blink an eye anymore. 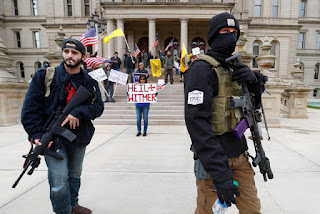 I mean, what’s the good of open-carry laws if they’re making you march around the living room with your toddler all day long? The point is to brandish. Can’t brandish by yourself. Look at them! All dolled up in bullet-proof this-and-that, bristling with firepower! Nothing’s going to take them down, by God. Psst: Do they know just how small a virus is? Perhaps they’re planning to rain bullets into the air in case we get a locust plague next. That, at least, would take down one or two locusts, making it more effective than trying to kill a virus with an antibiotic–Mr. President Science-Boy, sir.

And if you can’t rouse enough rabble with an imaginary assault on gun rights, you can always remind people how many fetuses have been lost compared with the number of grandmas dying ghastly deaths alone in the ICU. That old chestnut! Never gets old.

Hell, you can raise an army by telling people Democrat Governors want to shut down their states until December just so people can’t say Merry Christmas to each other. You can make up any old thing. There will always be willing buyers. Seeds…manure…sprinkle, sprinkle. Boom.


The demonstrations in Michigan and elsewhere have had some adorable touches. “Don’t carpool,” one organizer tweeted, “gas is cheap!” And so in a new natural world that has gone blessedly quiet and started showing signs of environmental repair and recovery in a few short weeks, amassing the maximum number of vehicles making the maximum amount of noise is bound to have the bonus effect of annoying liberals. Awesome, my dudes! Now, don’t you feel better?

When you get your socialist stimulus check from The Little People, a.k.a. the chumps who aren’t rich enough to quit paying taxes, just mail them to Betsy DeVos and her family, who have sunk a buttload of dough into your little “grass-roots” organization. That’s really her point, stripped down. She and her friends want the rest of your money.