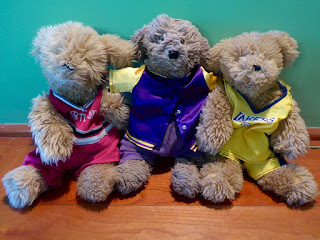 We don’t know how old Pootie is. He joined the household in the ’80s, but, as Dave pointed out, he already seemed to have some history, with a lot of preferences as to the way the world should operate, and if a lot of those preferences aligned with Dave’s own–a fondness for basketball and chocolate, say–that just goes to show he was going to be a good fit. I do know my friend Margo and I first spotted him downtown, in a store, where he was sitting in a basket of identical dogs. You could look at them as a litter, I suppose, but knowing the Poot, it was probably more of an entourage.

He was a force from Day One. Anyone could see that. Margo certainly did, and shortly went back downtown to the Arfnage and scooped Petey out of the basket. So Petey lives with Margo and Pootie lives with us. 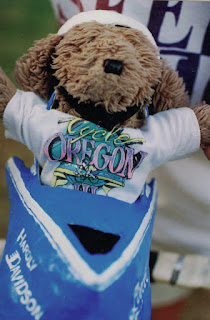 I’m not going to say Petey lives a cushier life but there’s no question she doesn’t fling herself headlong into it quite the way the Poot does. There is photographic record that Pootie was once blond and fluffy, but after seven Cycle Oregon tours and countless adventures in far-flung locales, and lots of time in the sun to work on his beige, he’s a changed dog. He’s even gone a little bald like his hero Kareem Abdul-Jabbar, at least enough to show stitching. Petey, on the other hand, has not let herself go. We don’t see her as much as we used to and it’s always shocking how fluffy she is.

But it’s not for lack of love. Not only is Petey a solid member of the Margo household, but Margo’s niece Valentina has taken a shine to her as well. In fact, Valentina adores the entire Pootie franchise and even has a Friend Of Pootie hoodie that, reportedly, is rarely off her long enough to have hygiene applied to it. It’s the niece, now ten, who discovered that, like herself, Petey is as much a Trail Blazers fan as Pootie is a Lakers fan. Which is odd in that she lives in California and we live in Oregon, but you’re not going to get anywhere arguing loyalties among stuffed canine basketball fans. Valentina only gets to hang out with Petey on vacations.

Anyway, we walked into an antique mall the other day where Dave spotted an old baby carriage right by the front door, filled with stuffed animals and dolls. And, said he, a Pootie clone right near the top.

I picked him or her up. “Man, real close,” I said, “a knock-off at least, but not quite right. Pootie has a rounder face. Doesn’t have this much of a muzzle.” Dave said Pootie the hell did too. “I have drawn Pootie thousands of times,” I said, with exaggerated patience. “I think I know what his face looks like.” Dave harrumphed. We turned the animal around and up and down and Dave settled him back into the carriage, on top, to improve his prospects. 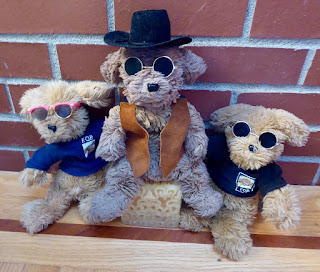 But by the time we’d seen everything in the store and were ready to walk out the door, I realized that even if the new fellow was not the same, he was certainly Pootular, and in any case we couldn’t just pick him up and admire him and talk about him and then put him back and walk out the door, because that would surely crush the little guy, and we’re sensitive to that kind of thing. So we fished out the three bucks and took him home.

Where I discovered he really was a member of the Pootie Posse. Pootie’s muzzle just looks flatter because he’s had some fur loved off. 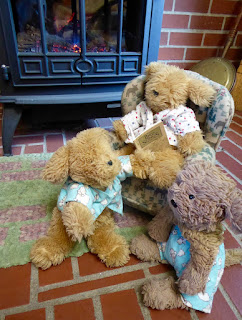 Margo saw it right away. You can hardly see a difference between the new guy and Petey. The new guy is blond in front and a little beiger in back, is all. We realized the little dude has spent the last thirty or so years propped up in a window, and then abandoned. But someone’s life is about to turn around at last. Someone’s going home with Valentina.