The Resplendence Of Studley 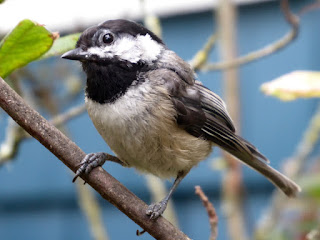 What with the ravages of extreme capitalism and the collapse of ecosystems and the rise of fascism and the complete surrender of the masses to the plutocracy, I know visitors to this site have one overriding question: How is Studley Windowson doing?

Studley is, of course, the primary chickadee in the Price-Brewster domain, who, in spite of missing some toes, has worked his fuzzy buns off year after year to produce successful progeny. He and his wife Marge both are models of industry but their efforts have never been assured. Last year they gave it a couple good tries and either gave up or moved on, but the favored nesting box outside our window produced neither chicks nor dees. The year before was also a wash, and not for lack of effort. It’s not that easy to turn an egg the size of a Tic-Tac into an operable bird. 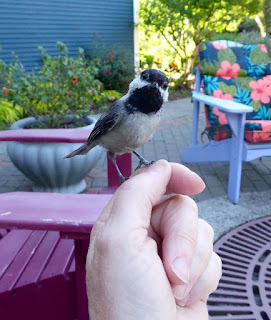 So this spring we decided to help out by offering live mealworms. One of the things climate change has affected is the availability of insects and other food at the proper time for feeding bird chilluns, so it was possible we really were improving prospects, but mainly we were hoping we could get them to land on our hands, and in that we succeeded beyond our wildest dreams. Marge never went over to Team Mealworm but Studley was all over it, and right now. The day after he made his first dodgy feint at our hands out the window, he saw me in the garden and got right in my face. Hey. Mealworm Lady.

For weeks, as the peeping in the nest box grew sturdier, we kept the mealworm train going. It was a fair transaction: Studley got quality groceries for his kids, and in return he healed the human heart, one and a half tiny feet at a time. Then what?

I am proud to announce that Studley and Marge created at least one new chickadee out of nothing but bird schmutz and valor. We didn’t see it fledge. We came home to discover Studley all excited as  hell and one short-tailed chickadee blundering into the wisteria upside-down like Woodstock. For weeks, proffered mealworms went directly from Studley to the new hire, who says her name is Dee Dee. He and Marge flew into a nearby fir tree and lots of cheeping came out, so we assume more than one chick made it into the world, but later all we saw was Studley and the one kid. If the rest survived, they might be following Marge around. I hope that’s what happened.

Eventually, Studley quit visiting every two minutes at beer thirty, but was perfectly happy to request mealworms by the bird feeder, or out the original window. The kid kept hopefully flapping at him but after a while Studley started eating them himself. He earned them. And you should see his new suit!

Breeding and providing take a lot out of a bird. Once things settle down, they have to refurbish their outfits. Studley was recognizable not just because of his mashed left foot, but because he had a bald spot, and a mottled face, and the beginnings of a hound’s-tooth check in the ascot region, and was kind of skinny, but given enough personal mealworms and a talent for the molt, he’s a brand new bird. He’s shiny and round and pink around the edges and ready for anything including Marge and winter. And Mama’s got a new tub of mealworms.