The Ring Around Your Anus 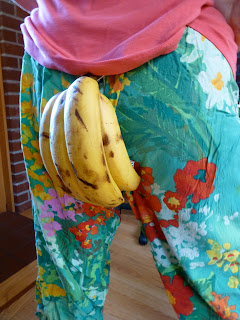 Thanks to the movie Beverly Hills Cop, most of us know that if you put a banana in your tailpipe, your car won’t go.

Thanks to The People’s Pharmacy, I know that putting a banana in your personal tailpipe makes it easier for you to go. Allegedly, it’s just the ticket for hemorrhoids. Insertion is easy, because of the natural taper of the fruit, but that’s not what they recommend. You are supposed to apply just a portion of the banana peel to the Affected Area. According to the website, “getting the banana peel to stay in position may be challenging, but no more so than a cabbage leaf.” I do not have sufficient experience to refute this. I do know that rigging up a whole banana peel on one of those sanitary napkin belts we used to wear in the olden days is not likely to be useful, let alone socially acceptable. The belts worked fine if you didn’t move, but take two steps and everything has migrated north.

Hemorrhoids are very common. By middle age, some 50% of the population is bothered by them. The other half doesn’t much mind. They tend to flare up and die down, but occasionally can become quite debilitating. It is said that life-threatening bleeding from hemorrhoids is rare, but it could be that that sort of thing just never makes it into the obituaries. If things do get especially dire, surgery is recommended. Outcomes are usually good. When it comes to the anus, we all like a good outcome.

If you find piles starting to get the upper hand, you might need to be examined with a proctoscope. A proctoscope is a long tube with an asshole at each end, I’ve heard, but that might be unfair. After all, the proctologist is just trying to help. They’re like anyone else–they take pride in their work. If they didn’t, they wouldn’t have proctoscopes named after them, like Kelly’s Rectal Speculum. Or they wouldn’t attach their name to the position a patient assumes during a rectal exam (“Sim’s Position”). For the record, if anyone wants to name something after me, I’d prefer a star.

Everybody specializes these days. We don’t have many general practitioners anymore like we did when I was a kid, and Mom would call Dr. Martin to come over when I came down with the punies. Dr. Martin always called my mom “Mother,” and one time when I was sick in bed he just poked his head in the door long enough to sniff, and then wrote out a prescription for penicillin. He was either very good or not so good. He was also, years later, the first person who performed a gynecological exam on me, which was mortifying, because we had never had that kind of relationship before. I felt humiliated enough before he went over to the clothes hook to sniff my underpants. The man was a sniffer. 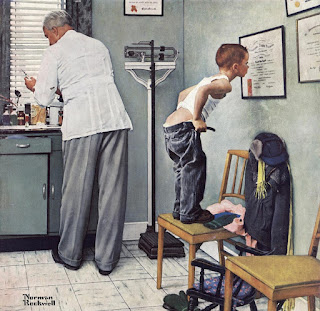 Anyway, nowadays doctors have specialties. I’m guessing the good sniffers dont’ get into proctology. In fact, there’s a built-in dilemma about consulting proctologists because there’s something suspect about a doctor who wants to be in that field. On the other hand, in any class of med students, someone’s got to be near the bottom, and there’s always an opening in proctology.

If you want to avoid the proctologist, you might want to keep some bananas on hand. Especially later in the year. According to experts, winter is the peak of multiple hemorrhoids. I’m going to try to remember that, because I’m always missing the Perseids.