Staying Up For The Second Show 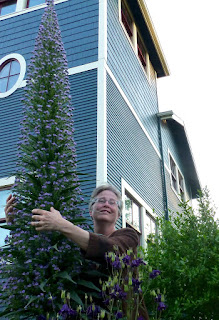 You all remember Mr. Happy. Mr. Happy was the little plant I bought four years ago with the salacious tag in it. He was the biennial that was supposed to grow for a season and then winter over and, when he reaches maturity, which in this case is what anyone else would call puberty, he was supposed to rear up into a gigantic pink flower spike of impressive girth and length. But you have to get him through the winter first, and since he’s a Southern boy, he’s not equipped for our winters. It would be touch and go all the way.

Nevertheless with the help of Dave, who wrapped him like a baloney sandwich during a cold winter night and, uh, fluffed the soil–let’s go ahead and call that his nocturnal mission–he persevered and did exactly what the teaser on the plant tag suggested he might do. I don’t know why Dave put himself out like that; he’s a compassionate fellow by nature, and maybe  he related somehow. But when Mr. Happy burst into bloom in the spring, there was nothing subtle about it. He rocketed out of his short hairs in an explosive fashion, and he didn’t begin to peter out until nearly winter. 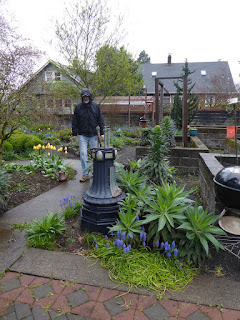 Echiums are self-fertilizing, so he was able to play with himself, and that’s all he did all summer. By the next spring, his kids were all over the place. There are pictures of Echiums thrusting out of the ground in profusion in their native California, full monty, and it’s pretty clear you could get a show like that in no time starting with just the one plant, if your soil is suitably lascivious. I thinned out all but about a dozen plants and hoped for the best. Last you all heard about it was in December 2016, when I still hoped they’d winter over, but they withered and died, every last one.

Which was disappointing, but ultimately fine. They’re not natives, and there’s no real point in having them here except as a novelty. 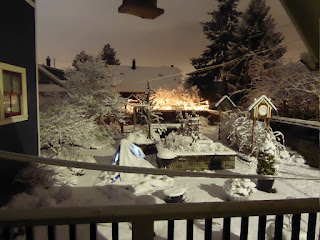 But then, last spring, darned if there weren’t another thousand Mr. Happies sprouting up everywhere. And I let them. These would be the original Mr. Happy’s slower children, I suppose, but we’re not here to judge, and if we were, we’d be judging their behavior. And we had another cold snap, and although I did not wrap them like a baloney sandwich, I did toss a prophylactic over the biggest group of them and gave them stage lighting, and they’re all still going, and spring is right around the corner. This could really be something. 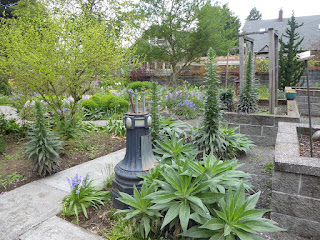 Original Mr. Happy was our backdoor man, so you didn’t see him unless you went down the alley, as it were. Maybe they’re used to this sort of thing in California, but around here putting even one Mr. Happy in your bed would be like showing up at the dog park with a camel. People will notice. And now we have way more than one. 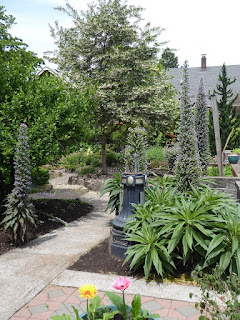 They’re all over the place. It’s going to be a detonation. I’d say they go off like the Fourth of July, but it’s really more like the last scene in Behind The Green Door.

Update: Only a few of them went off. They’re different sizes and shapes. Intimidation might play a role. Or maybe most of them just like to watch.