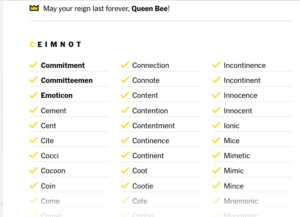 I play one of the scrabble games with my friend Devon. We have three going at once. I begged her to play it twice a day so it would last longer. There’s a lot of news to ignore out there.

But then came Wordle, and Quordle, and—God Bless America and the New York Times—the Spelling Bee! The NYT daily Spelling Bee is my kind of game. Make as many words as you can with a set of seven letters, one of which must be in every word. Oh, come to Mama! Our family played a version of this almost every day of our childhood. We were all insanely good at it. Well, maybe we were. It’s not like we played it with anyone else. Back in the fossil times, you could play a game without crowing about your victories to anyone not in the room. Let alone everyone not in the room.

As you find more and more words, the Spelling Bee helpfully tells you how you’re ranking. It starts out at Beginner and goes through Louie Gohmert, Short Bus, Postal Supervisor, Parking Lot Pigeon, and Golden Retriever before fetching up at the Genius Level, at which point you can sit back and enjoy a little display of digital applause from the Times, but it doesn’t mean you’ve found all the words. If you keep plugging away and get them all, you achieve Queen Bee. The third time I played, I drew a blank momentarily and stopped short of Genius, because I didn’t yet realize I can always get to Genius. (You just have to step on Louie Gohmert’s head.)

Which, of course, means now I can’t stop until I get to Genius, no matter what else I need to do that day. And often the rest of the words will occur to me while I’m on the toilet, uh, thinking. It’s my Queen Bee throne.

After a few weeks of this it becomes an obsession.

They say that your brain can solve problems for you when you’re asleep. Generally the only problem I tackle when asleep is how to run to a gate on the far side of a huge airport in thirty seconds. It’s always a life-or-death connection. I haven’t solved it yet after all these years. But apparently it is possible to solve things in your sleep, because the other night I shot awake at 2am and thought: ANONYMY! Which was the word I was missing for my crown.

I’m not saying that’s restful. It’s a pretty short trip between waking up yelling ANONYMY! and staying awake thinking about all the news you were trying to ignore.

Anyway, if you have a degree of propriety and don’t have your own blog, no one will ever know how good you are at these things. Because the thing about the Spelling Bee game is, unlike Wordle, it doesn’t keep track of your glory. You’d have to set up a spreadsheet yourself, and that would be immodest. It would be so much better to just have an official results page online somewhere a friend might trip over it, say, when you’re going to show them a cool video but you kind of accidentally click on the wrong tab. Say.

I wish the Spelling Bee would tell me how many times I was Queen Bee, I found myself thinking. If you’re the kind of person who has recently tried to turn the pages of a paperback by touching the margin, that kind of thing is important.

But then I realized how debilitating a streak can be.

My friend Margo and I went on the week-long Cycle Oregon ride in 1989. It was the second year they had it. We had a great time on Cycle Oregons Two through Eight and that was that. If we’d done the first one also, we’d have been in a diminishing number of people who’d done them all. We’d have a streak. We’d still be doing them whether we wanted to or not. We’d have pedaled straight through menopause and beyond. Our knees would fly off like hubcaps in a sharp turn. Our arm skin would flap like dog lips in a car window. We’d be terrifying people in the shower.

A streak turns fun into obligation.

Screw that Spelling Bee anyway. They think EXPELLEE is a word but they don’t take ANHINGA.