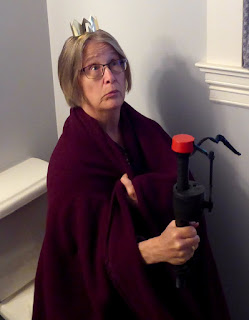 Well, strike up the marching band and scatter the rose petals. I am the Duchess of Dookieville.

I fixed the toilet.

It’s just a little thing I thought I’d try. It’s been decades since I could trade on my looks and even then I was just scraping by. I’ve always gotten a lot further with my sense of humor. But these days people are liable to just stare at you when you crack wise about the old Studebaker and having to go stand in line at the bank for money. I’ve decided to learn how to do some shit myself in case all my dwindling powers of ingratiation leave me stranded.

The toilet would be a big deal. I don’t know much about plumbing but I do know it can make grown men cry and throw things. I do know every time I noticed a new plumbing issue, I would attach a note to the dog and send her out to find Dave. I do know that he would invariably tackle the job and eventually solve it but not without skinned knuckles, bruised ears for blocks around, and eighteen trips to the hardware store. Plumbing involves striking a balance between one’s brute strength and the sensitivities of the pipes in question. Things need to be Goldilocks tight and no tighter or looser, but the little blonde is long gone. You think Papa Bear is scary? Give him a plumbing project.

I figured if I could fix the toilet myself I’d have enough credits lined up to allow me to be a jerk for weeks. Dave and I are very close to our toilets. You wouldn’t believe how close, really. Downright intimate.

The trick is to get in there and screw off the tippy-top of the uppy-downy and flush it out. This was a little fraught because all the parts were plastic, and reluctant, and you don’t want to snap anything off that can’t be resnapped later. But I did it. Then you hold a cup over the top of the valve and turn the water back on. We have excellent water pressure. I nearly drove the cup into the ceiling. Then you put everything back together again and hope for the best. A body can hope, right?

Sure enough I flushed the toilet and the water came charging back into the tank. I was the Toilet Queen! Bow down before me! Run a damp towel and some Lysol around the floor while you’re down there!

The next time I flushed we were right back where we started. 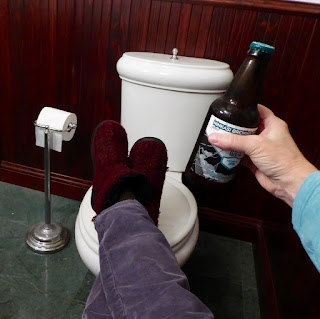 This was, I’m sure, a direct result of the dishwasher fiasco. The installers insisted I bring in a plumber to fix the shutoff valve and the plumber turned off the water for the house. When he turned it on again, all the faucets and toilets made an explosive horking sound the first time they were used. I figure rust nuggets from 1926 are on the loose and one of them was now a Toilet Bolus.

Which means the entire uppy-downy thing needed to be replaced. That was eight and a half bucks of potential glory in one little box. The hardware store lady said it was easy. I wasn’t born even close to yesterday. I ratcheted my expectations way down. But it was easy. Even all the little nuts and washers spun right off and back on again. I was a hero. I was the Countess of Caca.

Dave taught me long ago that an essential step in any successful personal project is to grab a beer and position a chair so that you can admire your work. It’s a little tight in that room, but I’m going for it.