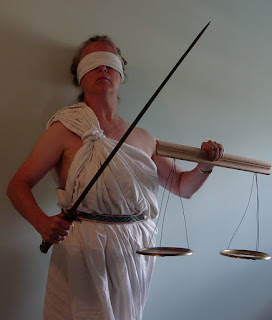 Jury duty. My service has precisely coincided with the longest stretch of sunshine this winter. We can tell because someone reported a little patch of it in a high window.

It is in fact an awesome responsibility to have someone’s fate in one’s hands; certainly in a criminal case, but even in a case like this one, where someone’s counting on fifteen million bucks to live on, and the other entity is merely a hospital that could pony that up in an afternoon if they bill enough aspirins. We are taking this seriously.

In a very disturbing element for your correspondent, I must report that for eight days now I have been leaning toward whichever side spoke last. The closing statements should be a dead heat.

This condition does not apply to politics. I have firm opinions in the realm of national and world affairs. I stand ready to inflict them on you at a moment’s notice. Not only do I have opinions, but I know they’re right, even the ones that are uninformed, and I know which people are wrong wrong wrong. If it’s late at night and I’m one beer over, I’ll let them the hell know, too.

I think I remember a time in my life when I could throw out an opinion in public, and it could be volleyed about, and sometimes my opinion would be shown to be over the line and sometimes it would dink the net and drop fair. Everyone claps politely and we try to make some more points.

Now I throw out an opinion in good faith, and discover that my debate opponent has been inseminated by fallout from passing chemtrails, resulting in an involuntary measles vaccination. And that this experience will inform every aspect of his world view.

Or that she is single-mindedly devoted to assuring that a series of perfectly dreadful events will occur in a precise order, leading up to the Rapture for herself and her identical friends.

Or that the person is just wrong. Even before I assemble my bullet points and trot out my data and proofs, I know the other person is wrong. Because he or she is unkind.

Kindness is not the same as naiveté. It does not preclude disapproval. Kindness is a willingness to recognize the humanity of others. People are not kind who feel safe only when they have constructed barricades and identified enemies, even if they have to make them up. Kindness is a thin thing if it applies only to identifiable members of their own tribe. If a person falls easily into gross generalizations about any group, they are lazy, fearful, and unkind. And wrong.

If you’re not sure what to think, you start by cultivating kindness. You can always hang ’em high later.