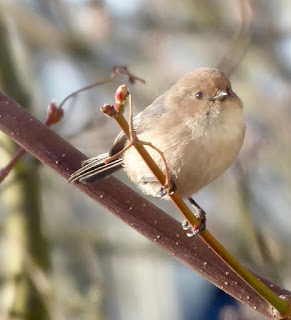 I don’t have a big wish list. I’ve got what I need, and if I don’t, I won’t take it personally. Still, there are things.

I want to see a woodcock. I want to watch that goof strutting with his big old eyeballs on top of his head. His eyeballs are so big his brain had to slide down the back of his neck just to fit them in, and I’m not even kidding. He’s dashing. He’s got rhythm. He goes PEENT. He is everything I want in a wish, except Here.

Also? I want a personal bushtit nest with personal bushtits in it. As wishes go, it’s not out of line. We are butt-deep in bushtits all year. They fly plurally from one tree to the next. If they had to practice social distancing they would just die. The only time of the year you’ll see just two bushtits together is when they’re building a nest. The rest of the flock has to be sitting around hyperventilating until they’re all invited back for the open-house. And believe it or not–they will be.

I make a point of looking for bushtit nests when we’re out walking. They’re often dangling from the branches of evergreens, but I’ve seen them in other kinds of trees as well. That’s right, dangling. They totally knit a sock. A fuzzy sock.

So the bushtits in our yard have to be nesting somewhere nearby, and every year I hope I’ll spy the sock, so I can watch. My sheltering-in-place plans already included trying to spot bushtits with nesting material and figuring out where they go.

And then, on a March evening warm enough to take our beers out to the front porch, we saw it. We saw it! There are two bushtits knitting a nest in our WISTERIA! Which is like six feet away from our chairs! On the PORCH! Right the heck THERE! Right the heck IN FRONT OF US!

Oh my god oh my god. They were just casting on, but I guess it takes a month for them to finish a sock. Once they turn the heel, they’re home free. I read that the male will be starting two or three nests at once and the female picks one and they finish it together, so there’s some danger she’ll pick a different one. But we’re a week in now and I think this thing is happening. So far it doesn’t look like there’s any actual knitting going on. It looks like it’s entirely made of individual dandelion flufflets and static cling. But there’s plenty of spiderweb and moss in there too. Maybe they’re just putting in the lining and they’ll bring in something stouter for the siding later. I plan to see. 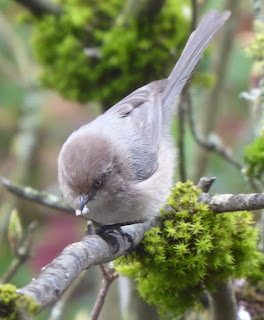 Just think of it: can you make a sock with your face using only spider butt juice and lint? Okay fine, but then can you pop out eggs in it and jam yourself and your teenage kids and your in-laws in there until teeny weeny bushtit babies come out? I thought not. You can’t even spend that kind of time with your family on Thanksgiving. But bushtits are all of the same mind when it comes to politics. It works for them. Thanks, thanks, thanks, praise the Lord and pass the creamed aphids.

And unlike most chickadees–Marge and Studley excepted–you can tell the bushtits apart. The boy has brown eyes and the girl has yellow eyes. That’s Chip up top and Mitzi to the left. We’re trying to give them all the space they need (and they don’t seem to need much) but we have been eavesdropping and we do know their names.

Everyone? Meet Chip and Mitzi. The Vinebustles.

And bonus woodcock from Mr. Internet: