There’s A Little Black Spot On The Sun Today 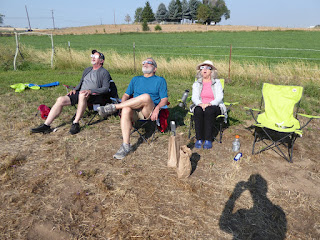 A Song Cycle In Four Parts. Part One

By now you’re probably aware of the remarkable phenomenon that happened last Monday: all at once, the entire population of the United States motored into one thin belt across the country, as though we were trying to snap a crease in it. I did it too, and took along my friends Linda, Max, and Peter for extra snap. There was no guarantee we were going to make it.

In fact, there was much to discourage us. We were assured that the few roads into major eclipse territory were going to be plugged with traffic (“traffic [noun]: all the cars that are not yours”). The cars might not even, technically, move. They might just coalesce into a single carbon-spewing organism of low motility, such as a barnacle, or a 40-year-old kid in his mom’s basement.

We were determined to give it our best effort, though, and got a head start by driving to our cabin on Mt. Hood, from which Madras, Oregon was normally a 1-1/4 hour trip. We got up at five a.m. and gunned down some coffee (but not TOO much coffee) and then eased our way down the gravel to the highway. We were anticipating a difficult insertion into the traffic stream that might require lube and a shoehorn, but in fact the cars were coming up well-spaced, if steadily. 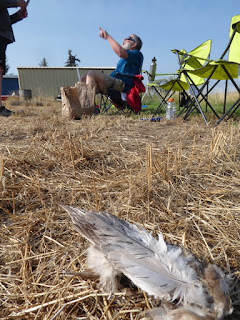 My own car was inadequate for the situation. It is adorably red, but that’s about the best you can say for it when you’re planning to stuff four adults and their luggage into it. Especially if we were expecting horrible delays at best and starvation or death by combustion at worst. So I rented a full-size car from Hertz downtown. I was afraid of a full-size car, inasmuch as I scrape my own against the curb with regularity and it’s the size of a Tic-Tac. But the worst was over once I got the sucker out of the parking garage, a hellish six-floor death spiral with a two-way lane so narrow you couldn’t even pass gas.

Big old Chevy proved to be quite comfortable though. We packed a cooler and put it in the trunk and everyone seemed to have enough room to wave their arms around if they got excited. Fifteen minutes into our trip it began to seem possible we were going to make it into the path of totality with hours to spare. The sun clambered over the horizon and into a clear blue sky. It was odd to see it, our old familiar star on its old familiar path. Did it even know what was going to hit it? 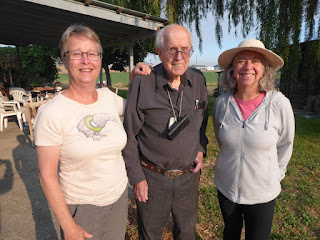 Not only were we sailing merrily toward our goal at highway speeds, but we had an ace in the hole. We had Debbie’s grandpa, and you didn’t. My friend Debbie mentioned on Facebook that her grandpa lived just south of downtown Madras and we could park in his driveway if we wanted to. For miles around Madras, cars were parked in fields in quantities rarely seen outside of a casino or an air show or somewhere else that attracts the kind of people who never walk anywhere. And we shot right past them to Grandpa’s house. Grandpa Melvin himself came out to greet us and show us his outstanding fossil collection. We were welcome to set up anywhere on his two acres and march right in the house to use the toilets like royalty. There were two toilets. Take that, port-o-potty masses! 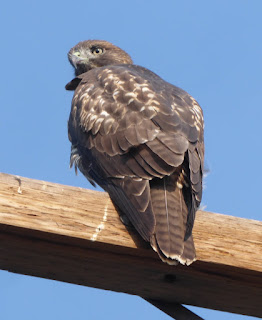 So we set up our folding chairs in the corner of a field for a private viewing. I had been leery of being in a crowd that would break into mandatory and prescribed woo-hooing and hollering, obeying a dog-eared script from rock concerts and sports events. However we four reacted, it was likely to be genuine. We had almost three hours to fill, and we took them and watched hawks with them.

Seeing the moon gradually intrude upon the sun through our eclipse glasses was interesting enough, but it was taking a while, and so we found ourselves trying to identify a distant bird instead (tentatively unraveled as a juvenile second-year flatchinated hawkperson in cruising molt), which led eventually to the pathetic scene of four of us standing with our backs to the dwindling sun not even looking at a bird, but at pictures of birds in our phones, and then we came to, and turned around to give proper tribute, and then the new moon slammed into the sun, and a flaming hole in the sky opened up, and sunset became general, and a roar from an unseen crowd swelled over the hill, and Linda went all to pieces, and lo, that, all of that, it was very good.