They Stamp Them When They’re Small 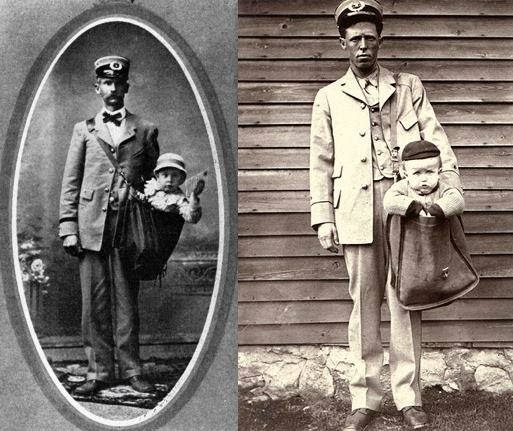 Several of you have sent me this photograph. Seems in 1913 you could mail a child, assuming you had correct postage. The child would ride the mail train accompanied by a letter carrier. Could this possibly be true? you asked.

Well sure. It wasn’t even that difficult. There’s no good way for a child to get lost on a moving train, even the ones that aren’t properly wrapped in brown paper and string. That’s not to say there weren’t challenges. They would not have had benefit of the new peel-and-stick stamps back then. You’d have to carefully tear off the stamps along the perforations and either lick them or apply them to a reliably damp portion of the child. And if the child were to gain weight on the journey, it could come postage-due, running the risk that Grandma might evaluate the item and conclude it wasn’t worth the price.

We weren’t mailing children when I was a letter carrier, but we certainly carried chickens and crickets and boxes of mealworms and the like. I would think it would be possible to mail a child today as long as it could be crammed into the flat-rate box, but I’ve never personally delivered one. There was that time I was starting out on a nice walking loop and one of the Menefee kids asked if he could tag along. I said sure. We were just going around the block. He went up all the stairs with me and chirped away about this and that. I didn’t realize there was trouble until we rounded the last corner and his mom was yelling his name at the top of her lungs. It probably should have occurred to me that he needed to ask her permission first, but it didn’t. Hell, he was ten years old. Or maybe three, I’m not good at that.

But what could she expect? I’m a youngest-child baby-boomer with no kids of my own. I have no experience with this at all. Our mommies used to broom us out the back door first thing in the morning and tell us to stay away until it was time for our maintenance kibble. Nobody knew or much cared where we were. We had a few instructions–don’t run with scissors, don’t stick your butter knife in the toaster–and those were expected to hold us until we reached adulthood. There was also “don’t take candy from strangers,” but we didn’t know any strangers.

Mrs. Menefee was too relieved to be upset with me, although she probably had a right to be. But shoot. The kid had to make do with a tiny back yard and a driveway and that was it. There were a bunch of brothers and sisters so the odds (I thought) of anyone noticing he was missing seemed low. Really, she’s lucky I didn’t let him slide around in the back of my Jeep, or bring him back stuffed with Wonder Bread and marshmallow salad. And make him do straight-leg sit-ups.

Heck. He got a whole round trip, with no postage.